March 21, 2012
As anyone who has known me for a significant length of time can attest to, I’m a bit crazy. Not throw-in-the-padded cell crazy (although I’ve had my moments) but the I-will-do-anything kind of crazy. As long as I believe my life experience will be enhanced by said proposal, I can be convinced. Not everything I’ve done I’d fess up to, but everything I’ve experienced has shaped who I am; and like everyone else I continue to evolve.
For this past decade my life has been in a constant flux. My husband, Ben and I left Massachusetts in the summer of 2003 because he was done with New England. After several vacations out West he wanted to give life there a try. We were separated at the time, but he decided to give our marriage another chance and asked me to go with him. We took the entire summer to travel across the country in a Minnie Winnie before settling outside of Seattle, where he had a job lined up. Three years and one Isaac later we sold that house, bought another RV (this time a 34ish foot fifth wheel) and hit the road again. We returned to Massachusetts for six months then on to Tucson. It was supposed to be a winter stay but evolved into a permanent settlement. It was time for one or both of us to obtain gainful employment and it was time for Isaac to go to school. Since his parents live there and RV parks are open year-round, it was a good fit.
In the spring of 08 while living in an RV park, I had the greatest fortune to meet Jess, aka SuperMom (seriously this woman needs a cape!) She is one of the dearest people I’ve ever met and our time as neighbors was entirely too short. Her husband, a commercial electrician, was away a lot. They came from Oregon, where he was still working and were looking to move to Tucson permanently. Her eldest son is the same age as Isaac and her youngest son (at the time) was two years younger than them. Isaac had friends! Jess said she wanted four children and a few months later she was pregnant with her third boy. Four months after that the universe decided that Isaac needed a sister. We were taken completely by surprise – again. It was like I caught being pregnant from her. When school was out for the summer in 09, her husband came down, they packed it in and moved back to Oregon. Her original plan was to stay for the summer then she would return with the boys. Before the summer ended she called to say she was staying. I was shocked and horrified - she wanted to stay with her husband and the father of her children! I told her never to call again and slammed the phone down. Just kidding. I wouldn't slam my iPhone - for one thing that doesn't end the call plus it's expensive. I swallowed my sadness, told her I loved her and we'd always be in touch. We moved out of the RV park and into a house two weeks before Turkey Day.
One year after moving into that house and seven months after Shiloh was born, Ben’s good friend offered him the job he’d left when we departed Massachusetts. Since he’d hit a ceiling with his employer in Tucson, he couldn’t refuse the opportunity to return to his career. I was never completely happy not living in New England, and even though my wonderful in-laws were there, with Jess gone Tucson held less appeal to me. I almost did cartwheels when Ben said he accepted the offer.
The day after Thanksgiving he was off. I stayed so Isaac could finish school. For six months I was a single working mother, translation: very busy. Being the control freak I am (something I should probably work on) I was thrilled to have my run of the house and a queen size bed all to myself. Lucy and Ricky had the right idea with the separate beds – push them together when needed but have your own sleeping space! We each need our own queen size bed. I'll get right on that.

After a month of limbo in Rhode Island we moved into our lovely, oozing-with-character Colonial complete with my ultimate dream kitchen.
I spent the summer reacquainting myself with the area and getting Isaac and Shiloh acclimated. I was constantly around them without a break. Not even work. At the end of summer/beginning of fall I joined the local chapter of MOMS club. Friends!! If not for those ladies I would have lost my marbles for sure. And I can’t thank my SIL enough for recommending joining a MOMS club.
Yet for the past few months I’ve been wallowing in a scummy quagmire, wondering how I could’ve possibly been so wrong about myself. I always thought I was the one person I knew completely. I thought I knew how I’d react in every situation imaginable, that I wanted to be married with children. But lately I’ve really had to dig each day to find joy in my life – and I have everything I’ve ever wanted. I’ve complained more about my children and being a mother than being happy with them and life. Monday was a revelation for me – I AM happy with my children, life is pretty good and I found my voice. I have Ms. Shiloh to thank.
After she awoke from her nap, the little cherub scampered over to the screen door, mooshed her face against it and said, “Ah-side?” Of course. So I shoved her gigantic (for a toddler!) feet in to their shoes, slipped my slides on and out we went. Being in slug mode, I sank into an Adirondack chair and started jabbing at my iPhone's screen. I finished my turns at Words Free and then there was nothing. Or so I thought. I took in my massive lawn while Shiloh played in the stones on our patio, and like a light bulb appearing over the head of Daffy Duck I realized the leaves weren’t going to rake themselves. So I changed into my workout shorts and outdoor sneakers. I need a yard work outfit. But I'm of the opinion any situation requires a new outfit. Nothing fancy for yard work, obviously – a couple of camisols with built-in bras and some shorts would work. If I’m going to be the main tender to this lawn, I’ll be in the sun a lot and I can’t sport weirdo tan lines. But for now work-out clothes will have to do. I digress...
I sprayed us down with sunscreen, grabbed Ben's yard work gloves, the rake and wheelbarrow and got-a-busy. Shiloh ran over to the ladder and slide. I didn’t think she’d mastered the art of climbing the ladder to the slide platform.
I underestimated her - something I thought I'd stopped doing. Guess she showed me!

So this particular area of the lawn has been neglected:


Honestly it was because this area isn't that close to the house and I've been lazy. Shame on me! So while over here in the great beyond I saw these: 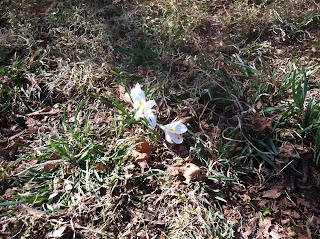 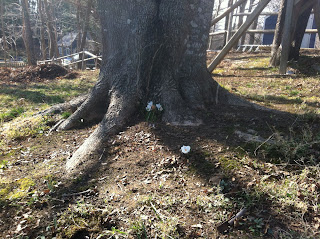 Seeing the new life after brushing away the blanket of dead leaves was exactly like when Alicia Silverstone as Cher in Clueless was standing in front of the fountain and got a clue - a chorus in my head sang "Ahhhhhh", the fountain water spouted a bit higher (yes an actual fountain appeared in my backyard) the sunlight shone a bit brighter and I got my clue. I love my children. Life is good. Not perfect, but whose is? And as my fitness hero Jillian Michaels loves to say: perfect is boring. If I open my eyes and look around, there is plenty for me to take care of. And if Shiloh hadn't been there, dying to go outside I would have missed my moment.