February 04, 2014
Greetings, all! It has been quite a while since I've regaled you with fascinating, and sometimes humorous, tid-bits of my life, has it not? Did you have a Merry Thanksgivanewyear? I truly hope so!

The time between my night out and now has had its share of ups and downs. We are again pet owners (no - NOT pet parents - please don't drink that Kool-Aid!). Prynne (black and white) and Nicholas (black - if you couldn't make the deduction on your own) joined Chez Sarjay in November. When Ben first mentioned he knew someone wanting to unload some kitties and showed me their pics, I was firmly against it. Then I thought some more that they might be good for Isaac and Shiloh and acquiesced. They've been fun - and good for the kids.

Miss Thang - er - Shiloh got her first haircut. No longer will she have to sit as Mommy hacks at her bangs. My hairdresser asked if I knew what I wanted, to which I replied, "Stacked in the back." Of course I picked a cut that requires precision and still. Shiloh turtled her neck and scooched about in the chair, so my fancy-pants do was doomed. But my hairdresser was able to smooth the jagged edges of my previous trims and she has an adorable bob. Shiloh is due for another cut, and I will take her when I go back next weekend. Oh, she's also using the potty! Man, that hurdle was a b*% to jump....


Thanksgiving was filling and Christmas joyous for the kids. I even acquired a few new Christmas cookie recipes which I need to share. My favorite new recipe from the mix is for Frosted Walnut Balls. Mmmmm.... I made those three times. More than I made my quintessential Christmas cookie - the peanut blossom. We have a Christmas calendar made up of small boxes attached together in the shape of a tree. Each little box has a number and can fit a couple of pieces of chocolate. It's been Isaac's only until this year. I made the mistake of leaving the tree within the grasp of one precocious three-year-old who didn't quite grasp the concept of one-a-day. She devoured the whole thing over the course of a weekend.

This, the fourth day, of the second month of the year two thousand, fourteen is Ben's second day at is new job (hooray!!!)  and my daycare is closed. Since, by law, I am not allowed to leave Shiloh locked in her room with her potty, a bottle of water and box of Toddler Chow, I took a vacation day. The pics below are of a part of my back yard I took this morning. Yesterday, a light snow storm draped this blanket of snow, and I just love the pristine, purity it imparts to the landscape... 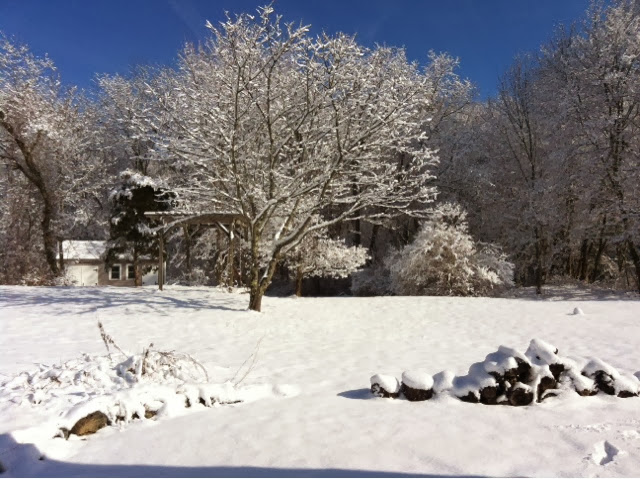 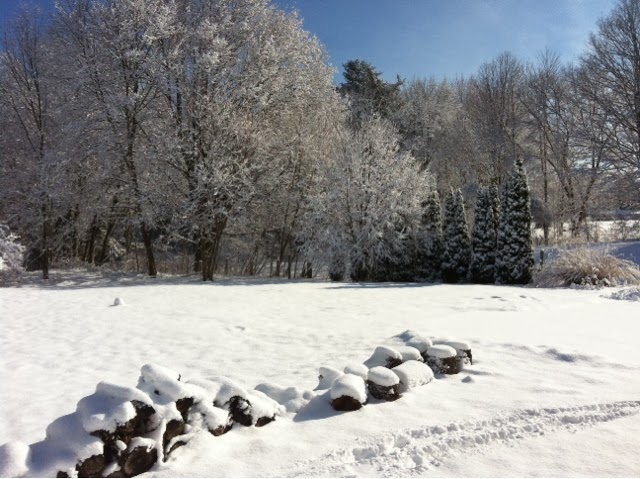 As much as I love pristine purity, the manner in which it's bestowed is most inconvenient. The likelihood that I will have to burn a third vacation day tomorrow because of yet another wallop of Winter's icy hammer made my blood boil. I awoke in a surly mood, and when Ben asked if the weather was supposed to be bad today, I growled, "No! It's supposed to gorgeous today. It's supposed to get crappy between midnight and 4 a.m.!" "Sorry I asked!" True to my fashion, after getting Isaac off to school and Shiloh up and fed, my switch flipped from "surly" to "accept what you can't change" while scrubbing my kitchen floor. My positive outlook was given a boost by the pristine purity, that it's not the end of the world to stay home an extra day, and by an inspirational story I pulled out of Isaac's school papers.

A fourth-grader at one of the Middleboro elementary schools started a lemonade shop as a way to help her best friend who was diagnosed with brain cancer. She sold the lemonade from her front lawn the moved on to farmer's markets and other community events. When the weather turned chilly, she adapted a cider shop and hot chocolate shop. During this journey, she met two others who've met the same diagnosis as her best friend. One of these children is the current poster child for The Jimmy Fund.

She presented The Jimmy Fund with a check for $2700 in the fall. She also sold hot chocolate at the school's Holiday Extravaganza (unfortunately we didn't attend) and used that money to get one of her friends a puppy for Christmas. There are now "Lemon-aide Packets" available at the school, minimum donation of $3.00.

That gave my perspective a much needed adjustment! I think I can spare the $3.00 also.

There's so much that's happened in this busy world I'm anxious to discuss, but I need to keep inspiration for future posts. Besides, keeping it short and sweet, you're more likely to read to the end! What better way to keep you until the end, then ending with free food?

Ben is of the opinion that breakfast must be traditional - eggs, bacon, potatoes, hash, sausage, etc. I, however, like to shake things up a bit. But my ability to come up with something unique without first being inspired by another is nonexistent. Enter my new favorite, healthy breakfast wrap - Egg, Kale and Tomato Wrap with Hummus, from none other than Giada de Laurentiis. My favorite Christmas gift was her new cookbook Giada's Feel Good Food. So many scrumptious offerings - I've tried several. I just love how her brain works! Thank goodness she says it's perfect for customization, and mentions swapping the kale for spinach and tomatoes for roasted red peppers. The first time I made it I was fresh out of kale, having made a fabulous soup with it, and I didn't have any tomatoes but did have the roasted red peppers. I've stuck with that combo ever since. The last time I made it Ben was in the kitchen and he commented, "That looks like an interesting breakfast." I'll have to make one for him next time.

EGG, KALE AND TOMATO WRAP WITH HUMMUS
WHAT YOU'LL NEED

Cut away and discard the stem from the center of each kale leaf. Coarsely chop the kale into 1-inch pieces. It will look like you have a lot of kale but it will cook down considerably.

Heat the oil in a large nonstick skillet over medium heat. Add the tomatoes, shallot, garlic, thyme, and red pepper flakes, if using. Sauté until the tomatoes and shallot soften, about 4 minutes. Add the kale and sprinkle with the salt and pepper. Toss with 2 wooden spoons until the kale wilts but is still bright green, about 2 minutes. Stir in the basil. Remove from the heat.
Fill a wide saucepan with enough water to measure 2 inches deep. Bring the water to a rolling boil over high heat. Break each egg into a separate tea cup. Turn off the heat under the saucepan. Immediately slide each egg from its cup into a different part of the water (the whites will spread out). Let the eggs stand until the whites are set and the yolks are still very soft to the touch, 3 to 4 minutes.

Meanwhile, using tongs, toast each tortilla directly over high heat until beginning to blacken in spots, about 15 seconds per side. Put the warm tortillas on plates. Spoon 1 tablespoon of hummus on each tortilla and spread to cover, leaving a 1-inch border. Divide the kale mixture over the hummus.
Using a slotted spoon, lift each egg from the water, wiping excess liquid from the bottom of the spoon with paper towels. Put the eggs on top of the kale. Slit the yolks and press on the eggs a bit so the yolks begin to run (this will make them easier to eat). Fold up the bottom of each tortilla and then fold in the sides, leaving the wraps open at the top. Serve.
Per serving: 403 Calories, 19 g Protein, 50 g Carbohydrates, 5 g Dietary Fiber, 4 g Sugar, 17 g Total Fat, 4 g Saturated Fat, 377 mg Sodium
Nutritional analysis provided by Giada's Feel Good Food