February 15, 2014
How did everyone's week pass? Last weekend I was able to collect the remnants of sanity by spending it in my favorite place with my best friend. I left work at 3 p.m. last Friday and made it to Kim's house by 6:15, with only one detour to acquire Cosmo ingredients. After some cocktails, my saintly friend treated me to a lovely dinner at my favorite local restaurant - Finz. Saturday we ran errands, and I cooked a steak house dinner comprised mostly of recipes from her Christmas present to me - a subscription to Fine Cooking magazine. I was only slightly irritated that the grocery store AND the meat market we went to didn't have filet mignon in stock, which was the cut of meat that was supposed to go with the cognac-peppercorn sauce, and had to settle for a lesser quality cut. To accompany the steak I made twice-baked potatoes (my own recipe), and mushroom-cauliflower sauté from the magazine (the recipe actually called for broccoflower - green cauliflower - which was completely new to me). We shared it with candle light, a tasty Malbac and quiet conversation. Heaven. 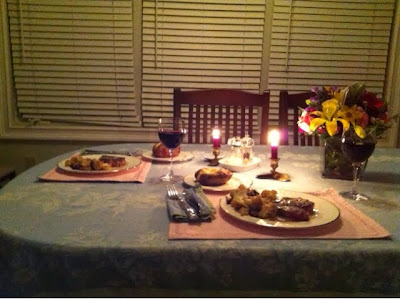 That night I also prepared a French-toast casserole from the same magazine. I popped it into the oven after we arose from our beds Sunday morning. Several servings remained after we'd had ours and I brought them home. Monday morning, I was completely flabbergasted that Isaac and Shiloh were less-than-impressed with it.

Another highlight from this week was my very first book club meeting! A wonderful lady at work and I have become pretty chummy. A couple of months ago she mentioned she was in a book club, with a great group of women. Aside from the company, the other thing she loved was that she reads books she wouldn't have otherwise considered. Immediately my interested was piqued, because even though I've always wanted to expand my reading horizons, I end up sticking with what I know whence left to my own devices. Despite the voice in my head whispering I was an interloper, I asked if I could join. Her unexpectedly enthusiastic "yes"permanently muted that horrid voice.

My first meeting was supposed to be last month to discuss a wonderful, wonderful non-fiction book - The Boys in the Boat. For a reason I can't remember, I wasn't able to attend. I made a point to harangue Ben over the preceding weeks to be home in time for me to attend. What a splendid evening. Interesting, friendly and intelligent ladies who actually thought I had some great
insights! Can't wait for next month.

Tomorrow we're off to meet Mumsy and Daddy so they can take Isaac and Shiloh for a few days. They're helping out - Shiloh's daycare is closed for two days and Isaac is on school break. They'll watch them until Wednesday, when Ben will collect them and the remainder of the week will close as normal.

THE INTERESTINGS: THE REVIEW

Given the glowing accolades plastered all over the back cover and "The New York Times Best Seller" stamp of approval, I expected more.

The Interestings is an ironically titled, quintessential character-driven novel that follows the intermingled lives of individuals who are inexplicably tethered to each other from the time they meet at an artsy summer camp. Each character is a deeply thought-out and fully realized person. The author's passion for her creation is evident - yet I was hard pressed to care about a single one of them, or their relationships. From the first sentences, I got the sense that this was a book with which I was supposed to become enraptured, but instead had an immediate disconnect.

We're introduced to The Interestings (this is the name they bestowed upon their collective) when they're teenagers at an arts summer camp in Belknap, Massachusetts. Plain, borderline homely, timid Julie Jacobson is folded in the corner of a teepee, mute. Baffled at having been picked by the oh-so-beautiful Ash Wolf to come hang with them, she doesn't want to draw undue attention to herself. Ash's spoiled, handsome brother Goodman, ugly-yet-confident Ethan Figman, voluptuous drama-queen Cathy Kiplinger, and delicately handsome, introspective Jonah Bay comprise the rest of The Interestings. This first night together is filled with pedantic conversations, fueled along by booze and weed. Julie, who never felt right as Julie, transforms into Jules after she blurts out something quasi-humorous and Ash quips, "See? I knew there was a reason I invited her in. 'Desemenizing", go Jules!" Julie she is no longer.

After this, the majority of the their story doesn't follow a linear timeline, but jumps between their adolescence, college years and different points throughout adulthood. And it's mostly centered on Jules and her relationships with Ash and Ethan. Ethan and Jules try having a relationship that fizzles because Jules isn't interested. Eventually Ethan and Ash become a successful with a capital S couple (although Ethan continues to carry a torch for Jules). Ethan creates a hugely popular animated show and Ash directs feminist plays. Jules' attempts to become a comedic actress fail. She becomes a therapist and marries Dennis, a very nice ultrasound technician who's medicated for depression.

While we are offered glimpses of their lives, and a horrible event occurs that send Goodman and Cathy packing, the other Interestings exist on the periphery, referenced regularly between the core trio and occasionally popping in for some interaction. A section of the story focused on Jonah, his brainwashing by a cult, his rescue from it by Ethan, Ash and Jules prompted by his mother is far-and-away the most interesting thing that happens.

For the most part, Jules seethes with jealously about Ethan and Ash's success, while simultaneously hating herself for it. The love she feels for them I found rather desperate. Even with a husband and child of her own, only if her relationship with them is okay, can she deal with her ordinariness. There is a period of time, though, when Dennis's depression comes raging back, he is unable to work and is a rather morose life-suck, that Jules soldiers through admirably.

Despite monumental wealth and success, Ethan and Ash don't have a completely sunshine-and-roses existence. Each keeps a dark secret from the other - Jules knows both the secrets. There is a point when Ash's secret is exposed and she and Ethan separate. While apart, an incident occurs that Jules encourages Ethan to talk to Ash about, and when he does, he also needs to tell Ash his secret. They reconcile, but have a precarious situation to conquer.

With the foggy vision of the characters' future and the hammy way of working in the book's title to "wrap everything up", the ending was perturbingly prosaic. While I'm glad I stepped out of my reading comfort zone with this novel, I won't be rushing out for another of Meg Wolitzer's offerings any time soon.