February 24, 2014
I could not be happier that the craptastic chapter of life that was last week has closed. It was just one of those weeks where a multitude of bad occurrences - one invited by my own stupidity - just colluded in a supernova of awful. The blackness that infected my psyche was quite off-putting, and if not for a dear friend allowing me to vent - not something I'm prone to doing - I would probably be in a room where no sharp objects are allowed. Since mine is a disposition that does not allow for happy mediums, nor gentle transitions, at 4:45 p.m. Friday, the moment I'd been waiting for all week happened - my switch flipped and the blackness receded. Woo-hoo!

We met Mumsy and Daddy at our usual meeting place last Sunday to hand off Isaac and Shiloh - a Friendly's in Lee. They were kind enough to spring for lunch. When Shiloh was done eating she got restless, diving under the table for food that fell and fidgeting between Ben and Isaac on their booth. Ben took her outside and moved the luggage from our Jeep to their car. Isaac became less animated while talking and needed a hug. Since this was Shiloh's first trip away without me, I was curious to see how she'd handle the good-bye. I was the last one to exit the restaurant, and the kids were in the back of my parents' car by the time I arrived. I opened Shiloh's door and she beamed a megawatt smile at me and exclaimed, "I'm gonna go have fun, Mommy!" Well all right! I told her that was great, smooched and hugged her, then moved on to Isaac who's disposition had brightened.

I said fare-the-well to Mumsy and Daddy, and took my parting gift - a half-dozen, sinfully delicious half-moon cookies from Holland Farms Bakery. Whence I plunked my keester in the passenger seat of the Jeep, I tore the tape and yanked the top up. Then I exclaimed, "What?! No chocolate?!" A moment later I saw that there were three of each. Whew! I inhaled one of the chocolates. The next morning I cut all the rest of them in half, put each half in a sandwich baggie and stuck them in the freezer. Since my own parents don't know me, I'm going to have to ensure they get their generous favors to me correct by specifying CHOCOLATE half-moons.

Isaac and Shiloh had a blast. Below are a couple of great pics courtesy of Mumsy. 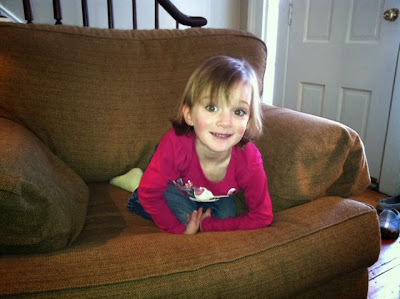 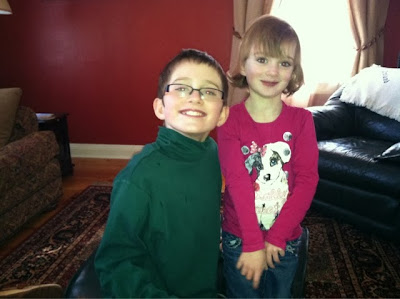 Ben got home with them on Wednesday around 8:15p.m., or so. After hugs, teeth-brushing and kisses they were shuffled off to bed. And I immediately followed. After I got out of the shower at 7:20 Thursday morning, they were both still sleeping. Very unlike them. So I roused them, they got dressed and had breakfast whilst I went forward with my routine leaving-the-house preparations. Isaac let on that he had been allowed to stay up until 11:00 watching movies. I chuckled and thought, "Vacation's over."

Saturday the three of us ventured to the eye doctor - a trip long past its due date. The eye doctor is an affable, down-to-earth guy. Isaac's vision deteriorated at a faster clip than I expected, as the doctor said that prescription was probably seven months out-dated. For Isaac's exam, Shiloh vacillated between spinning on a stool and playing with the EduRoom app. But when I sat in "the big chair" for my eye exam, she noticed it moved up and down. Then she exclaimed, "It's my turn!" I told her, "Shiloh, it's not a ride." But of course it was. After my glaucoma test, she commandeered my lap for the rest of my exam. The doctor was quite indulgent and raised the chair to its maximum height and then lowered us. Shiloh was tickled. Isaac, of course, wanted another turn on the eye-exam-chair-ride. Being the killjoy mother I am, I said no. However when I was done, he had to again sit in the chair for his dilation exam and was treated to a ride. Great doctor. Next was picking our glasses.

Since Shiloh wanted her own pair of glasses and couldn't understand why she wasn't getting any, the scant five minutes it took for me and Isaac to find ours was interminable because of her endless proclamations of  "I want SMALL glasses!" at top volume. When I brought our glasses to the check-out area and settled in a seat, Shiloh clambered into my lap. I cradled her so her head was in the crook of my elbow, she grabbed her fuzzy pink hat with one hand and started sucking the thumb of the other. There she remained for the duration of our check-out. In a week-to-ten days I'll be sporting my brand-spanking new Prada glasses!

Never one to feel comfortable just sitting around, I was on the go since I arose from bed at 7:00 on Sunday. Pancake breakfast (Isaac had 3, Shiloh had 3.5 - then fortyish minutes later they glommed down some hash and eggs Ben made) followed by kitchen and bathroom cleaning, some laundry, physical enhancement, then errands. When I returned, I started on a fabulous soup (will share recipe soon) and Isaac popped down from his cave - er - room looking for some interaction. He, Ben and I played Settlers of Catan, which Isaac got for Christmas. Since most games with Isaac end before they're over to because of his inability to be a graceful loser (one of the more unbecoming traits he inherited from me), it was a delightful surprise that we played to completion and Isaac didn't growl once - and he didn't even win!

Just when I was hoping for bright start to the week, Shiloh awoke at 1:30sih sick. Two more times after that did I have to run to her room and change her sheets and jammies. Needless to say I am missing yet another day of work. I fell back asleep and didn't awaken until 7:45 and neither Isaac and Shiloh were up, and Isaac's bus was due in five minutes. So I drove him to school. Shiloh is camped out on the couch in the den watching TV and the cats are all tuckered out from chasing a small basketball around.

Before the trek to the eye doctor, I perused the offerings from my most recent issue of Fine Cooking. "Chef's Secrets to Amazing Grilled Cheese" is listed first on the cover. The below sandwich caught Isaac's eye - grilled cheese with bacon and guacamole. I said we could get the ingredients while we were out. By the time we got back and the sandwiches were assembled, it was after 4:00. As soon as I saw the time and put Isaac's sandwich down, "linner" was the first word that popped into my head. Sure enough when he shuffled into the dining room, he glanced at the alarm clock and asked. "Can this count as dinner too? Can it be linner?" "Yes, Isaac. This can be linner." Then the scarfing began.

I swapped out the magazine's guacamole for mine had to substitute mexi-blend for the gouda and provolone because I didn't bother to double check the ingredients list before going into the store and had to make do. I'm also going to try using smoked mozzarella next time. The chef also recommends making the melt first, then stuffing it with the guacamole and bacon, this keeps the bacon crisp and guacamole cool. I may do that next time for the bacon, but I prefer my melty sandwiches warm all the the way through.

GUACAMOLE:
Slice and pit the avocado. Scoop gorgeous green flesh into a bowl, add the chopped shallot, tomato, jalepeno, cumin and lime juice. Smash, mash and stir it all together.

Heat a large, skillet or pan on a stove and toss in a tablespoon of butter. Whilst that melts either put just the cheeses on the bread, or assemble the whole sandwich. When the butter is melted and sizzling, slip on the sandwiches. If you hear that bubbly hiss, the butter is hot enough. Turn the heat to medium-low and cook for about 3-4 minutes per side. Use a spatula to lift the sandwich and check the bread. If it's your favorite color (golden brown), lift it out and drop in some more butter. When it's melted, flip the sandwich and let finish cooking. Depending on your preference, either move the sandwich to a plate then cut and stuff, or cut and stuff your face!