July 11, 2012
Have you ever noticed that when you have a splinter in your mind causing you some concern that it taint's your life's outlook? I'm currently experiencing this phenomenon. An issue has cropped that will resolve itself, but until it does I'm perpetually worried and my rosy outlook is now a darker red...

This became especially apparent to me yesterday. While listening to one of the NPR broadcasters recite the headlines, one was regarding the record-breaking tens-and-hundreds-of-millions of dollars that have been donated to both presidential campaigns. Normally that would fade into the white noise of the moment, but I recalled a comment Mom made during my parents' wonderful visit, and I'm paraphrasing here: "The amount of money being donated to the presidential campaigns really angers me." I agreed with her on principal, but was actually ambivalent at the time. When that sound bite was read yesterday, disgust, contempt and rage shot through me simultaneously like a jolt of electricity.

The Supreme Court really screwed the pooch with their Citizens United ruling! I know, I know. Those poor corporations are people. They have no resources and their voices were being stifled because they couldn't throw their money about without restriction. Then (queue Superman theme) in swoops Chief Justice Roberts and the rest of the Black Robes who voted for Citizens United like some warped Justice League of America, to ensure those with the weakest voices can now be heard. Now Truth, Justice, and the American Way is safe! Thank you Super Justices!

It's going to be a LONG four months listening to the President and his rival. They have absolutely NOTHING new to say, and will have nothing new to say until the end of the election. They each think they have the answer to the recession: "The wealthy need to pay their fair share!" or "We can't tax the job creators!"

To end the recession we all need to come together as a society and help each other out. This squabbling and bickering is pointless! If those "job creators" really wanted to create jobs, they'd throw their money where it is really needed - not at two guys gunning for the ultimate Prom King crown.

There! Wow. I feel better. Thank you if you stuck through it!

Nothing quite works up an appetite like a good, old-fashioned rant now does it? With lean protein and
good carbs tonight's dinner, Frittata with Sausage, Artichokes, Red Pepper and Goat Cheese is sure to satisfy. It serves 6 (or 4 depending on how big you want your pieces!) 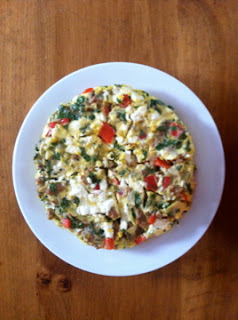 Preheat the broiler. Drizzle olive oil into a Dutch oven or an oven-safe pan. Plop turkey sausage into pan and break into pieces (this is where I usually read to use a wooden spoon, but I don't think that really matters - use whatever you have hand!) When the sausage is nearly cooked through, about five minutes, toss in the onions and cook until soft, about another five minutes. Then scatter the garlic and artichokes. Whence the garlic becomes aromatic, add the red bell peppers. Whilst the peppers soften scramble up the ten eggs and mix in half the goat cheese and all the parsley. Pour the mixture over the the sausage-artichoke-pepper yumminess. Cook until the eggs are set, about ten minutes. Remove from heat, crumble the last of the goat cheese atop it all and slide it on into the oven. In about three minutes, or when the the snowy gobs of cheese have melted, remove from the oven. Let cool for about five minutes, slice and serve!