It has been a dreary spring. While it is the weather to which I'm currently referring, the kiddos were disappointed to hear yesterday that the school year will need to be finished at home. We'll see what the announcement from our governor today will bring.

The rain and cloudy skies have been incessant! Yesterday began with a beautiful blue sky before the gray and rain rolled in. So I knocked the kitchen windows open a bit to let the fresh air in, and admired the scattered clusters of sunny daffodils that escaped the landscaper's excavation when I had the garden removed. Wee videos of the before and after of that can be found on my Instagram.

When I came downstairs from my bath I saw the wine decanter sitting on the dining table, and asked why it was out. Ben held up a finger as he exited the back door into the pouring rain and then returned with a lovely bouquet and said, "What's the point of having your own flowers if not to bring them in?"

Shiloh, ever helpful, remembered that the vases were under the sink, so no need for the decanter. She pulled out the little smiley-face bowl and said, "I remember I got this, I think for my 6th birthday." (Thank you Mimi!) then she snagged a vase for the daffodils. Now a lovely spot of natural spring adorns the dining table. (I normally keep a square bowl of silk flowers there.)

Aren't they cheery and friendly? I remember at the end of You've Got Mail, Meg Ryan said that daisies are the friendliest flowers. I humbly submit the above daffodils for your consideration.

To help support and cheer Shiloh on with her decision to become a vegetarian, I decided I would join her. The smile on her face when I told her melted my heart! (Christmas will be the one exception, as Giada's pot roast that I make annually, is simply the one thing I cannot give up.) I have realized there a few things for which I occasionally have strong hankerings, (ham breakfast sandwiches, bowl of hugs, tuna melts to name a few) that will be a slight struggle to give up. However, my new fantastically fabulous vegetarian cookbook, The America's Test Kitchen Complete Vegetarian Cookbook, is going a long way to providing suitable replacements!

So far, just one recipe, out of plethora I've tried, didn't come out as delicious as I'd expected. The rest have been fantastic - even the two remaining omnivores in the house have been satisfied without a meat main! I will share them in coming posts.

However, below is an easy, healthy concoction that I created myself, but inspired by the egg and kale breakfast wrap in Giada's Feel Good Food. 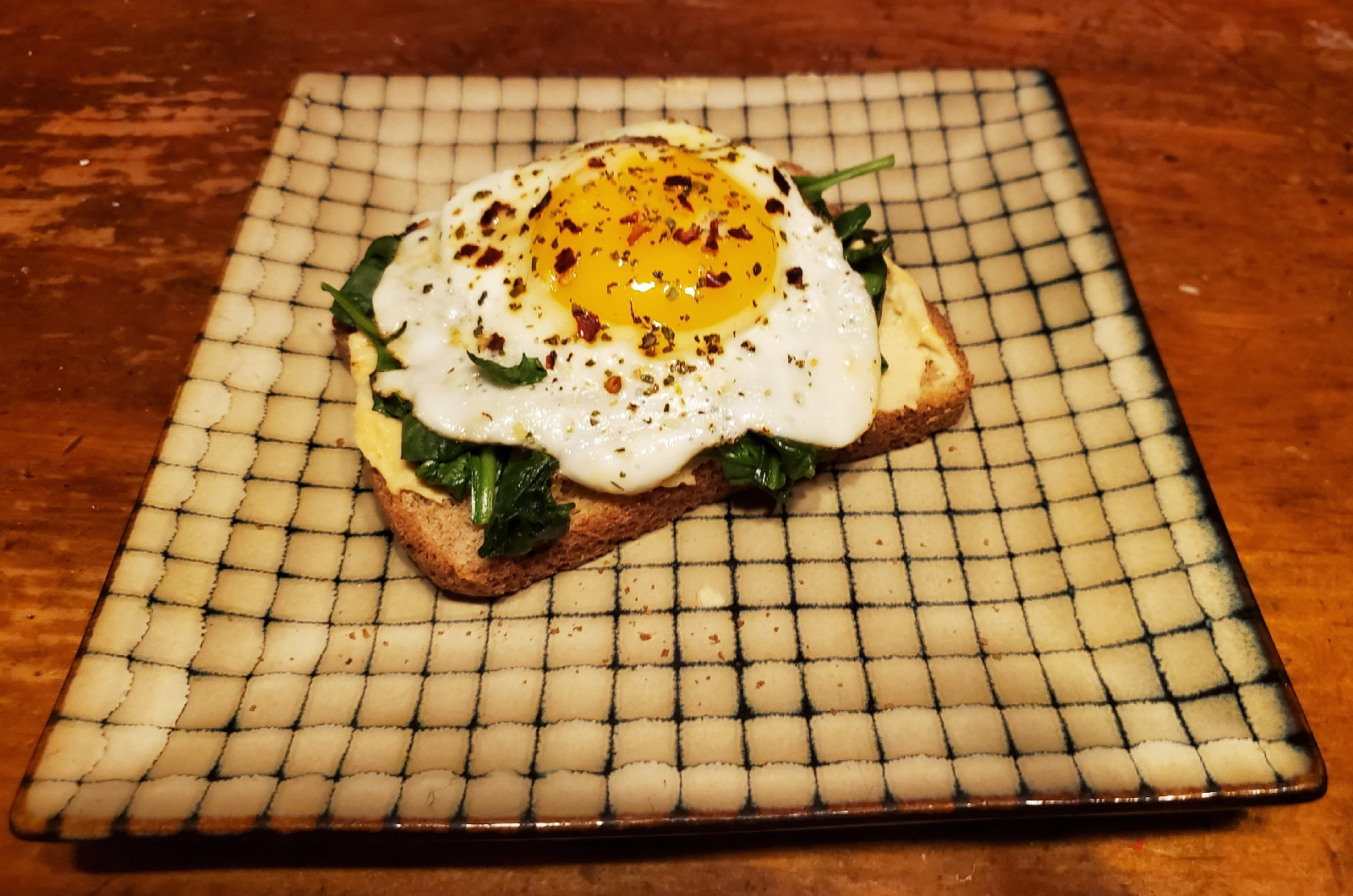 I'm not the biggest fan kale ever had (except in soup) and I found that eating a poached egg in a wrap was exceedingly messy! So above is a crispy-bottom egg, fried in a pan coated with no-calorie spray and sprinkled with a bit of salt, pepper, oregano and crushed red pepper. Then it was placed atop whole wheat toast, with hummus and wilted spinach. It can be fancied up a bit more, by sauteing some roasted red pepper, shallot and garlic with the spinach if you feel so inclined. And by needing to use a knife and fork, egg yolk won't dribble down your arm!