My Much Anticipated Return....

June 28, 2012
I'm back, baby! I know that you were all waiting with bated breath... Now you can exhale.  Much has happened since my last book review (Seriously horror fans, buy this book! It's such a deal, and remember how much I love deals?) School is out for the summer (AHHHHHH!!!!), my brave nephew started his stint in the Marines, a seriously horrific human being was convicted on the majority of his perverse crimes and an admirable writer shuffled off this mortal coil. Oh and the healthcare mandate was upheld by the Supreme Court. Those are just the ones I can think of off the top of my head.

First let me acknowledge how in awe I am of my nephew. He is embarking on a potentially perilous journey and it takes an amount of guts I don't possess. I can't recall if he's getting a reprieve after training around the time of the family reunion in August, but I hope that's the case.

Isaac is out of school for the summer. Like a friend of mine whose son is also in school nine months of the year, I need to find things to do to keep him occupied. I signed him up for a two-week stint of cooking and art oriented classes offered through his school as well as time with a YMCA sponsored "Summer Fun Club". Since he's been home with me, he's become rather infatuated with my workouts. That makes me happy - at least I'm setting a good example for him in one respect. I'm in the middle of my JM Body Revolution program and while doing Workout 6 on Tuesday, Isaac picked up his three pound dumbbells and tried to copy some the moves. He discovered that Mommy makes it look easy. :) I explained to him that he needs to learn proper form and practice a lot before he can do what I'm doing. However the Cardio 1 DVD in Phase 1 of the program is exactly within his range. No fancy lunge/biceps curls or push-up with plank rotation combos. Just basic cardio drills - three circuits of eight drills at a minute each. When I was done with my workout and went to take a shower, he put in Cardio 1 and knocked the whole thing out. I was tickled. He tried to get into the kickboxing DVD I did yesterday but it was too complicated. I'm calling a karate dojo on Friday to take advantage of their offer I saw advertised online (hope it's still there!) Since fitness is so integral to me, I'll totally get into his classes. I'll stay for them, do whatever the instructor says to encourage him at home, take him to tournaments - whatever. Maybe there's even parent-child classes. Hmmmm..... Besides, watching him try to mimic me - the boy needs instruction! The thought of a confident, coordinated and focused Isaac sets me aglow.

That monster Jerry Sandusky is going to prison for a long time. They know how to deal with the likes of him in there.

Nora Ephron is gone. That was unexpected as I had no idea she'd been battling cancer. While the remembrances of her movies have focused on When Harry Met Sally, Sleepless in Seattle (over-rated in my opinion) and You've Got Mail, my personal favorite is My Blue Heaven. Steve Martin and Rick Moranis are pitch perfect as the smooth-talking mob informant, and the smart, but stuck-in-a-rut FBI agent duo. And Joan Cusack nails the uptight, driven, by-the-book District Attorney who won't have the wool pulled over her eyes. The humor in this movie is quirky and subtly absurd; and just about everything Steve Martin says in his over-the-top New York Italian accent is hilarious. It took me two viewings before I fully appreciated it and it's one of my very favorites.

The Supreme Court upheld the Affordable Care Act. Now it can be used by both sides, albeit in exceedingly different fashions, as a motivating factor for our votes. Is it November 5th yet?

What are your thoughts??

Tonight's dinner is the very first entree I actually cooked without the aid of a can opener. The recipe's simplicity is what drew me to it. I was still nervous in the kitchen and wanted as little chance as possible to screw it up. I got it from a New York Times cookbook published in the 1950's from Ben's family. This is so yummy my father actually asked me for the recipe after I cooked it for him! Since he is one of the best cooks I know, I nearly cartwheeled to the cookbook so I could jot it down. Cook a box of Near East Rice Pilaf as a side and a scrumptious dinner is on the table within a half hour. 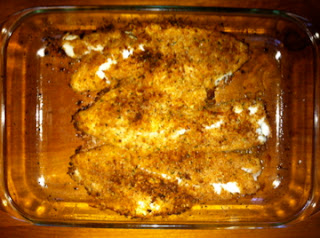 Preheat your oven to 510. In one shallow bowl combine the salt and milk. In the other mix the bread crumbs and Parmesan cheese. Submerge those luscious, pearly haddock filets in the milk-salt bath. Then transfer to the bread-cheese mixture and cover the fish in a bready blanket, then transfer it to a baking dish sprayed with a zero calorie cooking spray. When all the filets are arranged in the dish, drizzle with the melted butter. Obviously if there isn't enough butter to cover the filets, go ahed and melt some more! Bake for 10-12 minutes, until flakey. Serve, spritz with lemon and enjoy. Mmmm-mmm!