From the Depths of Anger Comes the Sweetest Confection

June 05, 2012
For the better part of Friday I was seething with anger. With every heartbeat fury coursed through my veins relentlessly. It was not pretty. As I tooled around completing errands I listened to my new Garbage album (no, really!). With its growly guitar riffs, frenetic pace and thunderous beats, track twelve, The One, was perfect for my mood. With Shiloh in the back seat I couldn't blast it as loud as I wanted but I repeated it several times. Good thing she can't complain about it yet...

Whilst simmering in my vexation stew, I also wished I was child-free so I could go out and do something really crazy - and not good crazy. Something more along the lines of self-destructive crazy, and that I couldn't also fueled my ill mood. I had to think of a way to channel my wrath. Only two things lift my mood: working out or cooking and baking. I'd already done my workout that morning, and when I'm angry I just can't muster the focus for a workout. It's more my diversion if I'm feeling depressed. So I put on my "Susie Homemaker Little Black Apron"(metaphorically). But that sounds like something I could market - hmmmm. Maybe I should call for one of those info packets and get myself a patent... ANWAY... Ben had a crappy week last week and needed some sweets to take with him to golf. I've been on a mission to make the perfect frosting and I wanted to play with my frosting tool again. Non-destructive distraction discovered! Good thing I had Shiloh after all.

For a bad week at work, a bowl full of hugs was for dinner. Since that dinner takes no time to make, I could concentrate on the cupcakes and making the perfect frosting. My culinary hero to the rescue with chocolate chip mascarpone cupcakes. These have a ganache topping; I'm not the world's biggest ganache fan. Besides, I'm a firm believer that anything chocolate requiring frosting should have white frosting. I attempted this frosting before and it came out decently, but not perfect. I made a few tweaks this time around and put the mixer on high for about a minute at the end and it became: The Best Frosting Ever. Seriously. I'm never buying jarred frosting again - and that's saying a lot! I've always preferred the jarred stuff and was certain that Betty Crocker and Pillsbury would have me beat in the frosting department forevermore - but no longer! I told Ben the frosting was particularly good before he left and he nodded and left. Later on he texted me to let me know that was the consensus at from his group as well.

The cupcake recipe says it makes twenty-four cupcakes but I was only able to eek out twenty two. Not really good for my caloric intake to have super-yummy cupcakes on my counter, but I was confident that the dozen Ben took with him would be gone. Alas he brought some home and they taunted me all weekend. I had to eat a few. Cupcakes (well cakes in general) are my sweets weakness. I made chocolate chip cookies last night which are much easier for me to resist.


The Best Frosting Ever

Plop the butter and cheese in the bowl of a mixer. Using the paddle attachment beat them on low speed until combined. Then add the powdered sugar, one cup at a time until absorbed. Administer the vanilla. Then turn the mixer to high and add the milk, about one tablespoon at a time until you reach the desired consistency. Make sure to beat the frosting for at least one minute on high to ensure proper incorporation. This should cover a 9 x 13 pan of cake or a double-layer 9 inch round cake. Mmmmmm double-layer 9 inch round....

Tonight a scrumptious frittata is for dinner! This comes from Jillian Michaels Master Your Metabolism Cookbook - Frittata with Spinach, Potatoes, Pepper and Feta. The red onion adds a sweet kick to the sauteed veggies and each bite is a flavor explosion. I'd recommend some oven-baked fries and/or a green salad as sides. The Alexis brand of frozen oven fries are good - I'm partial to the rosemary and olive oil flavor. But it is high time I start making my own oven fries. 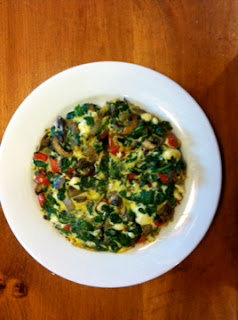 Set a rack about 4 inches from the broiler and preheat it to low.

Heat an 8 - 10 inch cast-iron skillet, or any other oven proof nonstick skillet over low heat. Add the wet spinach leaves to the skillet and let wilt. When just starting to wilt, remove the spinach to a colander and squeeze any excess water.

In a medium bow, whisk the eggs until beaten. Then stir in the spinach, feta, oregano and black pepper. When the potato mixture is cooked, pour the egg mixture over it. Cook until the eggs are set around the edges 5 - 10 min.

Place the skillet under the broiler for 1 to 2 minutes until the top of the frittata is puffed and lightly browned.

Now I don't have an oven-proof, nonstick skillet so I have to use my dutch oven. To prevent the eggs from sticking to the bottom, after all the veggies are cooked to the proper consistency I move them to a plate. Then I scrape the bottom of the pan with a spatula and slather on the nonstick cooking spray. Voila! Nothing sticks.