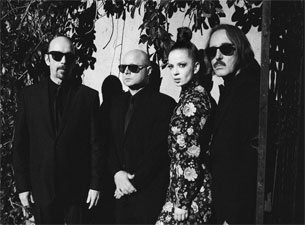 You may or may not agree (if you don't agree, you're just wrong - sorry but you are) Garbage is greatest band on the planet. If you need convincing, go here and watch their f*%ing awesome performance on Letterman. I fast forwarded through Letterman to get to them (okay, I watched Bill Cosby) but I sped on through the rest of it. When they appeared, I cranked the volume and Isaac and Shiloh came running. Shiloh started bobbing her head and exclaimed, "Momma, dance!" Isaac stared, mouth agape through the whole thing. Then he asked, "Why are they called Garbage?" Being the devoted fan that I am, I was of course able to I explain the origin of their name. When he said, "But it's not garbage!", I then explained the meaning of irony. This gal is going to see them at The House of Blues in Boston tomorrow! I'm so excited I could pee my pants - but that's gross so I won't.

What's the haps with everyone? I know some of my friends, whom I haven't seen in a long time have had some happy (baby) and sad (pet and family members passing) events. Thank goodness for Facebook, or I'd never know what's going on - since I'm the worst about keeping in touch! There are some birthdays coming up, Shiloh's is next week and Isaac's at the end of May. Cripes, where is the time going?

Someone at work told me they found the blog over the weekend. Considering they are of a prominent position, are extremely busy and I hold them in the highest regard, I was exceedingly flattered. I hope it was an agreeable read!

The past couple of weeks haven't been the greatest. We aren't able to go to my parents' for Easter this year, ala the great reunion last year, which has left me mildly depressed; so I'm happy to at least have the concert tomorrow. Most recently some bugs have passed through the homestead. Isaac had to stay home from school on Friday and I am currently fighting off an annoying cold. The wonderful, wonderful lady who makes all the food deliveries for my company's lunch meetings even commented on how awful I sounded on the phone today. I thanked her profusely and replied, "I'm a darn sight better than yesterday!" Sunday, I couldn't even make it out of bed until about 10:30. I did my hair and make-up, (something I've yet to be too sick to do), kept the sweats on then shuffled downstairs to make myself a spinach, mushroom and Feta omelet. Whence I opened the refrigerator door I was greeted by one lonely egg. Grrrrr! Off I went to the store. By the time I got back I was no longer hankering for my omelet, but a scrumptious shrimp dish - right out of my signed Giada cookbook, which I've shared here. I've tried a couple of others in the section "Change of Pace" that were phenomenal - which I'll regale you with later.

Check back later for pics, and gobs and gobs of Garbage.....

This is super-easy and fantastically flavorful - provided you don't burn the ciabatta bread, like I did yesterday. I put them under the broiler to crisp up the tops a bit more, and pulled them out with a beautiful char. It made me glad that it was a package of ciabatta sandwich loaves so I just popped two more into the oven and decided to forego the broiler. I also have yet to use the tarragon. I have the neat little spice mix from a lovely gift bag bestowed upon me at Christmastime from a lovelier co-worker. Fennel is this spice mix (which has licorice notes, like tarragon) and it says it's great for fish. So I sprinkled that on instead. Yum!

WHAT TO DO:
For the bread: Place an oven rack in the center of the oven. Preheat the oven to 400 degrees F.Arrange the bread halves on a baking sheet and drizzle with olive oil. Bake until light golden, 13 to 15 minutes. Cool for 2 minutes. Rub the warm bread with the cut-side of the garlic. Set aside.For the topping: While the bread is cooking, in a large skillet, heat the oil over medium-high heat. Add the garlic and shallots and cook, stirring frequently, until soft, about 2 minutes. Sprinkle the shrimp with salt and pepper and add to the skillet. Cook for 3 to 4 minutes until just pink and cooked through. Remove the shrimp to a cutting board.In the same skillet, add the tomatoes and season with salt and pepper. Cook over medium-high heat until the tomatoes start to soften, about 4 minutes.Meanwhile, cut the shrimp into 1/2-inch pieces.Turn the heat under the skillet to high. Add the wine and, using a wooden spoon, scrape up the browned bits that cling to the bottom of the pan. Boil for 2 minutes. Add the stock and boil until most of the liquid has evaporated, about 2 minutes.Remove the pan from the heat. Add the shrimp, arugula, mascarpone cheese and tarragon, and stir until the mixture is creamy. Season with salt and pepper. Spoon the creamy shrimp and sauce over the toasts and sprinkle with salt and pepper. Cut into slices and serve.Read more at: http://www.foodnetwork.com/recipes/giada-de-laurentiis/toasted-ciabatta-with-shrimp-tarragon-and-arugula-recipe/index.html?oc=linkback