March 31, 2013
To say Tuesday night was great is an understatement. I hadn't seen my friends in way too long, and this time we were actually doing something other than hanging out!

When the clock struck 2:00 p.m. I dashed out of work, got into my Jeep and bolted for the North Shore. Maria called me whilst traveling to check on my whereabouts and to assure me that my room was ready. (Normally I stay with Kim whence I go to Salem, but I thought she was staying the night at a hotel in the city because of an audit at her work the next day).

Maria and I arrived at her house at the same time. She stepped out of a sexy, silver Audi A4 that she'd acquired the previous weekend and was to be our transport to the concert. Okay by me! We were greeted by her awesome wife, Jenny and their adorable Jack Russell. Jenny finished up some work, Maria and I changed - she even read my mind and asked if she could make me a sandwich. I hadn't had anything to eat since breakfast and was starving.

She laid out the plan for the evening. We were meeting some other friends of theirs at the House of Blues, one of whom had an "in" with the upstairs, called The Foundation Room. She, Jenny, Kim and I were going to hang at the bar downstairs, though, before the concert.

Around 5:15, we left, slipped into Maria's gorgeous, gleaming ride and were off! There was some discussion as to what her name was going to be. Heather was at the top of the list. Not sure if that's been decided upon yet. There wasn't really anything good to listen on the radio, then I suggested we set the mood by listening to Garbage (original, I know - but that's me). Jenny plugged my phone in and set it to shuffle through all the albums I had. I didn't know that was an option - learn something new every day!

When we got to Landsdown Street, Maria pulled into a parking lot. We were promptly told that we weren't allowed to park there and had to move to a garage down the street. Whilst walking out of that garage, a guy in pulling in asked if we were going to see Garbage - looking  for assurance that he was in the right place. The line was substantial, but we were going into the bar first so we went right on in. Since we were patrons, we'd get a note on our check that would allow us to cut.

The three of us were seated at a table, and about five minutes later Kim texted to say she was outside. I bustled to the door and flagged her in. I was disappointed with the speed of service. It was a good fifteen minutes after placing our drink orders that we received them, and mine was rather watery. Our waiter was nice enough, but seemed a newbie. The food was delicious, though! When we were done, we were allowed upstairs to The Foundation Room, and met up with the rest Maria's and Jenny's friends. The bar there was much better! I was able to tell the bartender how I wanted mine and Kim's Cosmos made, and she let me sample it first. It needed a touch more cranberry.


When we left our table to head to the show there was a snafu. The ticket-taker informed us that the tickets Kim and I had were for the second floor, the others were for the first floor. Jenny and Maria went in and Kim and I waited in the stairwell. A few minutes later they returned, with bracelets on their arms. The four of us traipsed up the stairs again, they gave us their tickets, and we walked down the stairs on the other side. Kim and I handed that ticket-taker our 1st-floor tickets and viola; we landed about ten feet from the stage! Then The Goddess (Shirley Mason) sauntered out, singing "Automatic Systematic Habit" (the first song Not Your Kind of People) and the rocking began! I can't remember every song, but lots of my favs (not all) and they didn't neglect a single album. The Goddess owned the stage, and we got to share a personal moment with the band. It was one of the guys' daughter's birthday (can't remember which one). Shirley is also her godmother. The girl was brought onstage with a cake and we all sang happy birthday to her. I whooped and hollered so much, I wondered what my voice was going to sound like the next day.

When it was over, we left together. I rode back to Salem with Kim so we could catch up. She dropped me at Maria's, and she and Jenny and I stayed up for a while. When I looked at the clock and it was 12:35, Maria said, "How did that happen?!" Exactly. I crawled into bed for another night of three hours of sleep. But I was up-and-at-it by 5:30 so I wouldn't be late for work. I left early enough to actually stop home, drop my luggage and grab some breakfast before heading to work. I ran on Red Bull Sugar Free all day; then collapsed into bed after tucking Shiloh in at 7:15.
It was awesome!
Below are pics courtesy of Maria and Jenny. 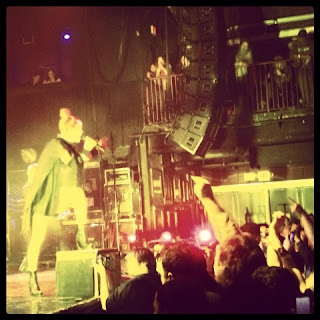 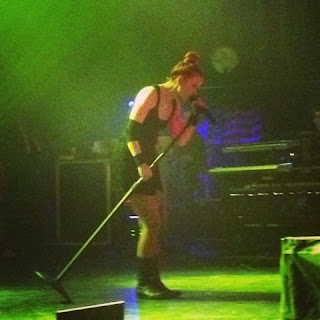 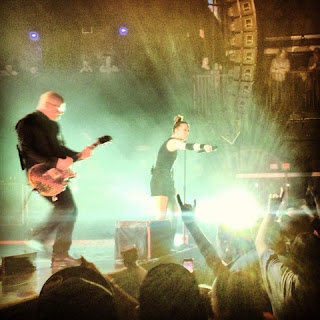 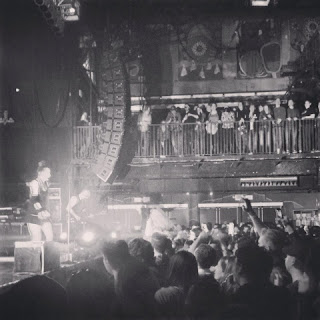 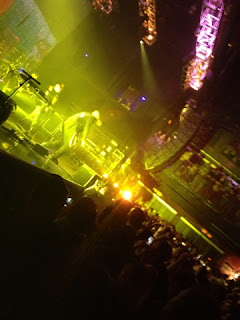