September 21, 2014
Apple Cinnamon Sour Cream Coffee Cake. Third time was a charm for this scrumptious slice of heaven. I made it three times within a one week period. The first time was to take some for my quarterly visit (I'd like to up this to at least bi-weekly) with Christi, aka Super Friend. We ran into each other unexpectedly at the local playground, she'd just picked her boys up from school and brought the there - Shiloh and I were already there. (We made some new friends at the library, and that was mutually agreed upon time and day to bring the kids together. Also, this new friend is a native German speaker and her four-year-old is already bi-lingual. Time to get get the Duolingo front-and-center again!) Anyway.... Christi and I hadn't seen each other since the end of June, and she invited me up for coffee the next morning. I said I would bring something, she said she loves when I bring baked goods. Now I had to bring something good and original. (Not because she would slam the door in my face if I showed up empty-handed, but I just like to manufacture pressure to place upon my shoulders. I need to work on that.)

Since my planned trip to the grocery store was for the next day, I had limited items at my disposal. This Apple Cinnamon Coffee Cake was my salvation. Since wisdom comes with age, I now improvise if necessary with recipes, instead of making preparations for hari-kari. I used Macintoch apples instead of Granny Smith. I had only 3/4 cups of white sugar for the batter, not the full cup the recipe calls for. I added 1/4 cup of dark brown sugar. When I mixed the dry and wet ingredients, there wasn't enough wet to permeate the dry. I added 1/4 cup more milk. I use the convection option on my oven, which usually decreases the baking time, and this was done in 20 minutes.  It came out delicious, and I was inspired to play some more.

The second time I made it, instead of adding 1/4 cup of milk, I added 1/4 cup of low fat sour cream. It was moister and deliciouser. Then on Thursday, the third time, I listened to my heart and poured the mixture into a nine-in round pie plate, instead of the eight-inch square, and had to bake if for a half hour. Perfection! This was so good, I took four slices with me to my hair dresser. I go to a local salon, she does a fabulous job every time AND she gives me the best price around! I wanted to let her know much I appreciate the the top-notch job and bargain-basement price she provides me, and those slices were my thank you card.  Recipe to follow.

Since Household-Family Manager has become my full-time occupation again, I've been endeavoring to become more social and to find activites for both my progeny that are free, or close to it. The library has been pivotal. A sign for the Soule Homestead Harvest Fair was on the billboard and it sounded perfect! The three Saturdays preceding last weekend, I took them to a Pump n Jump at a nearby mall. It's a place with blow up bouncy houses, and slides and a game room. They can literally bounce off the walls for a few hours. It's become their favorite place to go. Then last Friday Isaac came from school with a rash, most likely Poison Ivy, and that put the kibosh on Pump n Jump that Saturday. The trip to the ER Saturday night because the rash kept spreading was loads of fun! It could have been much worse - it took about an hour. They gave him his first dose of Prednisone there and he awoke rash-free! I digress....

I told them we were going to the Harvest Fair instead of Pump n Jump. They were cool with this. Well, Isaac lost his cool after his friend left yesterday afternoon and it was time to go. Like all youngsters (boy does that codger-esque!) Isaac and his friend spent the last hour of his visit in front of the computer. When his friend left, Isaac's interest in the fair suddenly vanished. POOF! I said, "Well, you're not going to sit around here all afternoon in front of the computer." His face contorted into this comical amalgam of irritated disappointment.

From the parking field to the Homestead entrance Shiloh and I walked. Isaac flounced. As a result he tripped on a bump in the road in most dramatic fashion. Definitely not as bad as my little fall; but he had some hang time before crashing to the ground, skinning his knee. Tears and loud pleas of, "Can we please go!!!" lasted a moment (but it felt like hours). When the sting subsided he composed himself and we continued on. We were just in time to see the bird portion of the Bird and Reptile show:


After the birds there was a display of olde-tyme versions of a few of todays appliances and machines. Anyone who knows of Isaac's fascination with washing machines can imagine how ecstatic he was to discover the Maytag washing machine circa 1927: 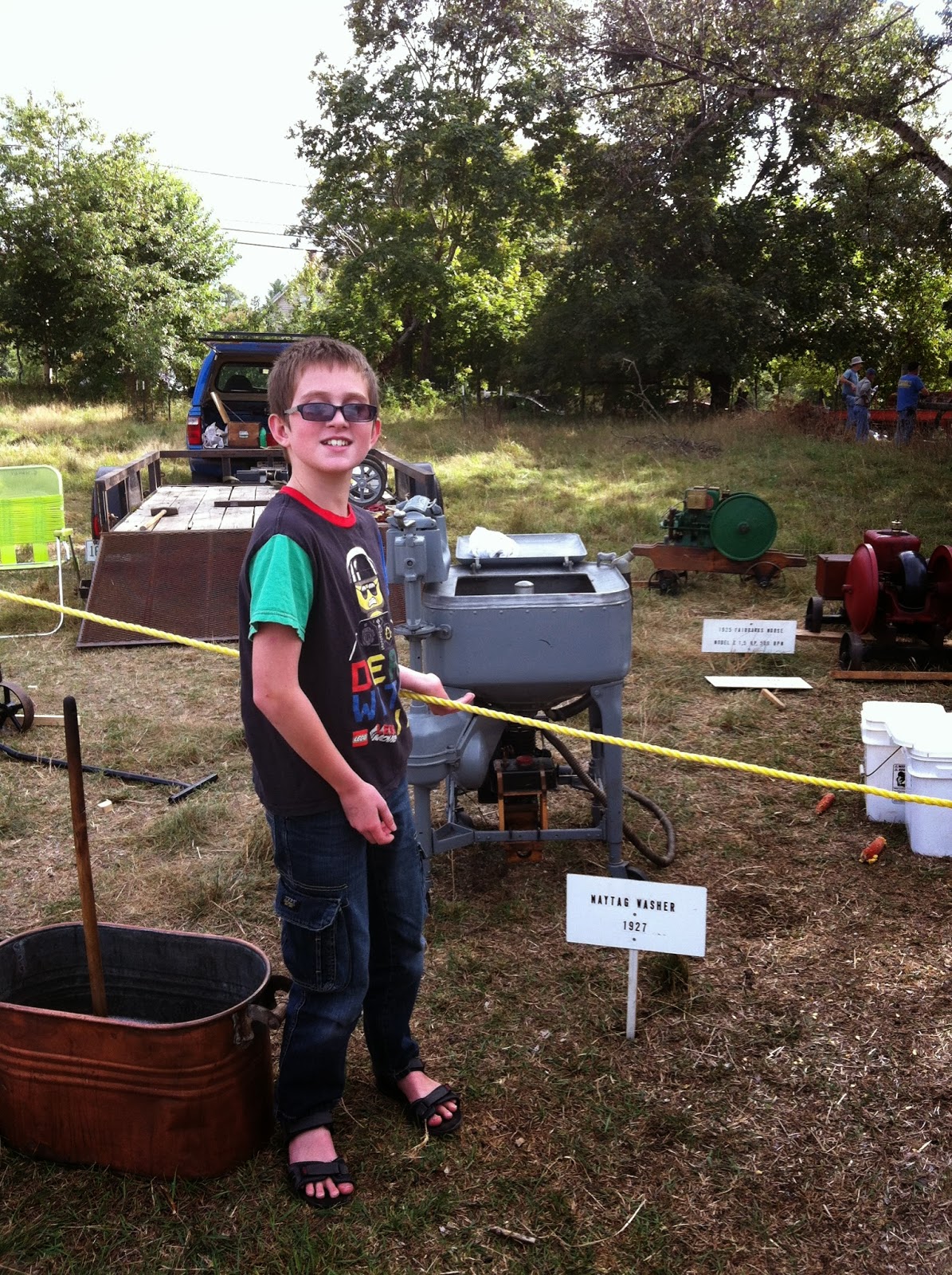 Before we left, I ran into my new friend. I met her husband. They were seated in front of the folk band playing. She was knitting a vest for her two-year old boy. She said that it was originally supposed to be a poncho, then her husband said, "I put my foot down."  The kids got to play for a bit. There was this two-wheeled cart with handles that the little ones climbed in-and-out of. Shiloh took turns with my friend's daughter tipping the cart. Then Isaac pulled them around, much to their delight. And because I was on top of it - I got pictures of it all. I just don't feel like sharing...

The Soule Homestead offers Junior Volunteer work. I'm signing Isaac up this week. There are two Saturdays between now and Christmas for Junior Volunteer work. Much to my amazement, he was thrilled when I told him! I may sign up for some volunteer work myself (not the icky, poopy work - but the newsletter, deliver fliers work). 'Twas a lovely afternoon!

Preheat oven to 350 and spray a 9" in round pie plate with baking spray.

Whisk all the dry ingredients in a large bowl. Make a well in the center. Whisk all the wet ingredients together in a separate bowl, then pour into the dry. Stir until batter is moist. Fold in the apple pieces.
Pour batter into prepared pie plate.