A Twist of Fate

September 30, 2015
Yes, it's true. (Any Ghostbusters fans know what line cometh after this?? Hehe.) I am now being paid to write. The universe most definitely had a hand in this.

The week after returning from vacation, I started perusing the job offerings. I replied to an ad on Craigslist for a part-time office assistant. I almost didn't send my resume, since the job was in a town about 45 minutes from me. But I thought maybe I could wow them so much I 'd get the expensive end of the pay scale, thus neutralizing the commute factor. I also thought it more likely I wouldn't be called back, since there are lots of people looking for work. But I had this feeling I should send my resume anyway, so I drafted a simple, few-sentence cover letter, attached my resume and clicked send.

The next morning I received a call, which I let go to voicemail. It was the owner of the company. She said she received my resume and wanted to discuss my qualifications. I called her back later that morning and we hit it off immediately. She told me, and I'm paraphrasing here, that she opened my resume because she was intrigued by the cover letter. We determined that I would be a great fit for the company and position, but needed to determine if the commute would be worth the salary. Since she was hiring outside the company, and the new employee would require training, she was looking to pay on the minimum end of the spectrum. I mulled it over for the rest of the day, and came to the conclusion that the cost of the commute in fuel and wear-and-tear on the Jeep would make taking the job pointless. We spoke the next day, and expressed mutual dismay at the reality, and she said she hoped our paths would cross again. I agreed. Then she said, "Before I let you go, I'd like to ask you about your writing and social media knowledge." Thus my entry to professional writing! I will be producing one blog post a month and managing their FaceBook Page.

Who is this company, you ask? 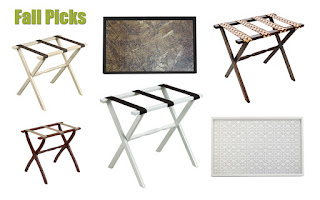 They make high-quality luggage racks, and other folding furniture. Follow the link to read my very first published work and peruse their catalog! Since they hired yours truly, and I happily accepted, you know they have taste! (winky-face)