June 09, 2016
How's everyone been lo these past few months? If you follow me on FB or Twitter, I haven't been completely silent!

The ups and downs of life's roller coaster keep things interesting, to say the least. Something I'm looking forward to immensely, is the trip Isaac is going on this summer. Ben's parents have an RV, and are taking him on an adventure! Since a six-week, country-exploring excursion is nowhere in our immediate future, I was thrilled when my mother-in-law said they wanted to do this. He's going to see a lot, get unplugged, gain maturity by having to live up to new expectations - oh my heart is aglow!

Ms. Shiloh is a bit jealous. I told her we'll go on our own adventures. We'll go see Gammy and Grandpa, and find fun things to do. She was so thrilled that we'd be going to visit Gammy and Grandpa, she taunted Isaac, "We're going to see Gammy, and you're not." After hiding a chuckle, I told her she didn't need to be mean about it. I'm excited about seeing them, too! It's been too long.

Other ideas for blog posts have been percolating and I hope to share. Even though I have been contributing to a couple other sites, it's not good to keep this one dormant. With that said, we'll move on to my book review! 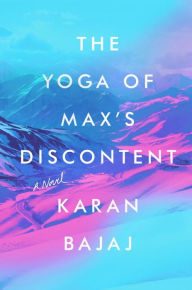 Despite being aware that I need to expand my literature horizons, I don't often take the plunge on my own. That's why I was thrilled when author Karan Bajaj asked me, several months ago (eeeek!), to review his book, The Yoga of Max's Discontent. With yoga in the title, I was, of course, immediately on board. I thoroughly enjoyed it - especially since it's unlike any book I've read before.

The novel chronicles the journey of self-discovery which Max Pzoras undertakes. Max, a successful Wall Street drone, who, despite overcoming myriad challenges to claim his place at the top of Western society, feels lost and detached. Given that his entire life has been an exercise in duality, it wasn't surprising to me that he had no idea who he was. He was raised by a single mother in the hood who pushed him to make something of himself. He was able to go to a private school, where he excelled. At the end of each day, when he came home "He'd take his shirt out and sling his pants low and play with Pitbull's sawed-off shotgun, not once mentioning calculus, SATs, college applications, and everything else that possessed him." Even as an adult, Max was trapped between two worlds, able to blend seamlessly into each, but belonging completely to neither.

We meet him on a bitterly cold winter night, leaving a New York City hospital with his younger sister, having just visited their dying mother. While trying to get a cab for his sister, there was an altercation with a homeless man in which he nearly lost control. But before Max could pummel the homeless man, he was stopped by a shirtless East Indian, food cart owner. He literally grabbed Max's raised arm before he could land a punch. Max was shaken by how "quickly he'd regressed to the violence of his teenage years". He was also enthralled, not just with the strength of this thin man, but that he appeared perfectly comfortable shirtless in the frigid weather.

Max visited with the vendor (Viveka) a week later, on his way home from his mother's memorial service. He offered Viveka his coat as a thank-you for stopping him, but was politely turned down. Viveka explained that because it's much colder from his corner of India, he doesn't feel cold, and even "the Himalayan yogis sit in their caves wearing nothing for months even when the temperature drops to thirty or forty degrees below zero". Viveka dispelled Max's disbelief by assuring him he'd seen the yogis when he was stationed on the Siachen Glaicer when he was in the army. As Viveka regaled him with the yogi's seeming super-human abilities like walking through seventy inches of snow with ease, barefoot and wearing a loincloth; or being able to approach, and scare away a bear, Max became hooked. He was particularly moved when Viveka describes the expression on the yogis' faces: "Not happier, more like...silent, complete. Like the mountains around them. Asking no questions, seeking no answers, just certain - as though they knew exactly who they were."

I loved how the next scene, that gives us a glimpse into Max's work day, punctuated the worthlessness of his career, despite his success and how much money he's made. Issues about his life's choices that had been buried, started bubbling up, and he ignored his pressing Excel spreadsheet to read story after story of Westerners traveling to India to find enlightenment from a yogi. After reading multiple blogs about a Brazilian doctor who had left everything to become a yogi, and had "penetrated the mysteries of consciousnesses and the material body and had reversed the process of aging", Max sent e-mails to the different blog authors, asking them to call or e-mail him to discuss their journeys and the doctor. Then he up and quit his job to go in search of the Brazilian doctor, who he believed will give him the answers. The obvious irony here is that he'd never be able to take off and find himself without the success he garnered in his career.

What I admired most about Max is his tenacity and bravery. Not many would up and quit the cushy lives they spent years building to find themselves in the wild across the world. The feats he overcomes are incredible.Since there isn't a shortage of Westerners looking for gurus in India, they are a dime a dozen, and Max really needed to sift through the silt, as it were, for the genuine article.

The first stop on his journey came when two young daredevils on motorcycles said they'd take him up the mountains in the winter, after being told by everyone else he couldn't go until the spring. After they left him, he got lost searching for a trail and nearly froze to death. But he was saved by an old woman who lived in the mountains. Max didn't know for certain he'd lost his way until she said his destination was many kilometers off from where there were. Max was escorted back down the mountain by a yogi, wearing nothing more than a robe.


When he rejoined society, his tail tucked firmly between his legs, Max was ready to go back home. While going through his e-mails he saw a response from one of the bloggers about the Brazilian doctor. This man eventually directed Max to a subsistence farmer in the desert, who hosts people who are serious in their quests. The rules here were simple, not easy:  Three hours of yoga every morning. You may not speak, except once every ten days. A percentage of what the farm grows is shared with the nearby village. This is where Max's yoga practice began. He outlasted the two other people who were at the farm when he arrived, and many others that showed up over the years, but couldn't hack it. Max didn't just master the physical aspects of yoga while here, but was humbled by the true meaning of symbiosis.

His time at the farm prepared him to finish his journey. Just before he left, his teacher told him that he believed Max was going to go on to a place that he, himself, won't be able to reach. Max had many hurdles to jump after this, and he certainly punished his body in order to achieve enlightenment. While I was humbled by the hurdles that Max overcame, I also realized seeking this particular truth required a stellar magnitude of selfishness. This isn't a judgement or condemnation, just the truth. Max overcame insurmountable physical odds in pursuit of his goal, but he also abandoned everyone in his life. The beauty in the ending, for me, was that Max had traversed a Mandala to find his answers.