April 16, 2012
During these obnoxiously trying times deals are the name of the game. The day will come when Austerity is no longer my middle name, and when it does I'll still look for great deals.

When I was young, single and carefree with my own money to spend I never looked at the prices of anything. I figured if I needed it, toss it in the cart. It never occurred to me to look elsewhere for a better price. My favorite pasttime during those years was ordering groceries online at work via the Peapod service with Stop and Shop. Ten minutes after arriving home: knock, knock, knock. My groceries were there and I didn't have to set foot in the store! Granted the amount of groceries I needed back then pales in comparison to what are required now. Given how picky I am now about the food I bring into the house and always want to find it for the best price, I won't go back to the delivery - even if I could.

The greatest deals on groceries for me is no longer Wal-Mart (hooray!). It's at a grocery store called Market Basket. A friend of mine and Ben both said I should go there. My first excursion to this mecca of marvelous prices was a late Friday morning several weeks ago. I pulled up and was flabbergasted at the jam-packed parking lot. Apparently it was no secret that this is the place to shop. It's a good thing I no longer feel the need to troll for the closest parking space because an open space far away was hard to come by. Inside, the store was teeming with swarms of people. Aside from paranoia, mild claustrophobia is another on the list of mental ailments which plague me. I also have HUGE personal space issues. There was absolutely no room to comfortably turn my cart, and being encapsulated by an egregious number of people I didn't know made me edgy. In such situations, a headache descends within minutes; and I could feel the little ball of pain swell up at the base of my skull.

While navigating the treacherous isles I took note of the prices and more importantly, their selection. I've found that the grocery stores with the best prices don't have a wide variety of items - especially cheese. While I am not above buying the store brand of anything, there are some food items that I won't go generic on because it hasn't worked out well. One of those things is arborio (risotto) rice. I bought a cheap version of that once and the risotto texture came out like mush, and not from being overcooked. The best deal I ever got on arborio rice was when Ben worked for World Market in Tucson. They carried this brand: 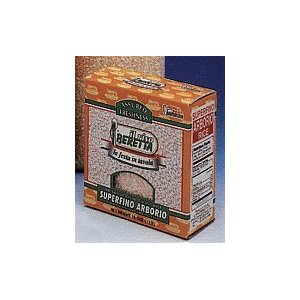 It was only four dollars, plus we got an employee discount to boot. The local grocery stores carried it as well, but at double the price. I haven't seen it out here and now go with this: 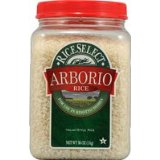 Until the trip to Market Basket I'd only seen it in the $7.50 - $8.50 range. Including at Wal-Mart. At Market Basket it's $6.50ish.
As I sprinted through the store as fast as the crowd would allow, I was brought to a crashing halt by the ginormous cheese display. They had every cheese I use on a regular basis - including mascarpone and Applewood Smoked Mozzarella. The smoked mozzarella was definitely the best deal at $2.99, since it's double that anywhere else. Plus their price for Parmigiano Reggiano was the same as Costco ($12.99/lb) - as opposed to $19.99/lb everywhere else -  and I didn't have to purchase 2 lb brick! They also carry this: 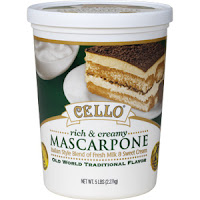 as does Costco; and again, I don't need to buy it in bulk.

With the the suffocating feeling growing exponentially, I just grabbed a few things and bolted. Last week I discovered the time to go there is 8:30ish Monday morning. I could navigate the isles with room to spare and wasn't elbowing people out of the way. I spent nearly an hour filling my grocery cart to the brim and got out of there spending less than $200!

My favorite deal for the moment is this funky, cool cable-knit short-sleeve hoodie that is SO me (because as you all know I am both funky and cool). I snagged this treasure while shopping with a bestie after a haircut a few weeks ago. This particular bestie is my favorite person to shop with. She has introduced me to some great clothing stores; every time we shop I get something awesome and for a great price! Back in the aforementioned carefree years she took me to this store Tristan and America. It was chock full of funky cool clothes, appropriate for office work. It worked that I wasn't a deal hunter back then because there weren't many to be had in that store, but the clothes were awesome. So we met at the Northshore Mall after my haircut a few weeks ago and she took me this store, Zara. She said she saw this store while in Greece a few years ago; and it was packed with a line trailing out the front. Understandably she didn't want be swallowed up by a crowd, so she Googled it and found one at the NS Mall. This store is SOOOOO me. Upon entering I zeroed in on an awesome bi-layered skirt - the under layer was black mini; the over layer was ankle-length and shimmery. It was hanky time; the drool was coming - then I saw the price tag and the drool dried up. It was $69 - as I expected for such a lovely garment. Not that exorbitant, but out of my price range. Then bestie said, "We need to go to the sale section." We scamper on over. There is a wall with my price range - $9.99. I pulled the sweater off the rack and gazed at it for a moment. I glanced at the tag: 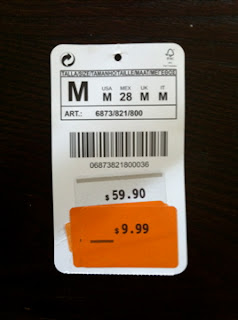 Hmmmmmm. I slipped it off the hanger and over my shoulders then walked to the mirror. I was sold! Bestie said, "That is so you!" And that is exactly what Ben said when I got home, after asking how much. When I said it was $9.99, he replied, "Now that's a sale." I've worn it a lot as of late - it spruces up anything. I'm going to have to ask bestie if she remembers the skirt I salivated over, and if she can check to see if it's moved to that $9.99 wall....

The last deal I'll mention that has tickled me was one I didn't even know was for a limited time when I got it. I downloaded Redlight King's album Something for the Pain for $6.99. This is an excellent album. There's some pretty powerful stuff on here. Take, for example these lyrics from Built to Last: I've been beat up and broken down, I've been there a thousand times, I've walked through the worst of hell, my friend and we've all got our reasons why, I gave my life for the things I have, it all flies by so fast, I walked through the worst of hell my friend, now I know I was built to last, built to last... or these from Comeback: Look into my eyes, you'll see a graveyard filled with dirt and defeat, look into my eyes, you'll see the weight on my soul, where the fallen angels sleep, the crooked hearts and crossroads meet, where the haters say my name and carve it in stone. (This song is on the new The Avengers movie soundtrack - a movie I had no interest in until I learned that Joss Whedon was involved with it.) After listening the the album I liked them on FB (like a good little zombie). While perusing the page I read the album was on sale only for that week. Score!

But the best deal I've had by far, are my friends and family. Such blessings you are... Incalculable in value and you add so much to my life. You guys rock! (I can hear that collective "awwwwww")

So today is the day. What day you ask? The day that I begin to ditch the last ten pounds that have been irritating me for the past six months. I am officially sick of them. In celebration of this momentous event, tonight's meal is one of the first dinners I had when I started losing the first fifty after Shiloh was born. It's Sauteed Chicken Breasts with Creamy Chive Sauce. It's creamy and flavorful, minus the guilt usually associated with creamy. I find that Near East Wild Rice makes an excellent side for this.