Invasion of the Isaac Monster; Easter

Even though as mentioned in Greetings and Salutations, I had a revelation that brought me to the conclusion I am happy being a mother, that doesn't mean it can't suck. This past Saturday was one of the worst mother-days I've had in a long time.

Part of my life philosophy is balance. The universe requires balance. Since I had a fan-tabulous day on Friday enriching my pool of friends and meeting Giada, it's only logical that a day equally crap-tacular should follow.

My wonderfully quirky, smart, sweet, washing machine-obsessed Isaac was kidnapped. The Isaac Monster was dropped in his stead. I had to deal with this snarling beast ALL Saturday. This isn't the first time this switch-a-roo has occurred and it won't be the last. The moment the kidnapping occured was when I reminded him that he had used almost two of the three hours of screen time he's alloted per day playing Sim City. This was at 9:30 a.m., or so. I'd just popped in my totally awesome kickboxing DVD Rapidfire Results by Susan Chung and was nearly finished with the warm-up. He handled the reminder with a growl and stomped off to the den. Then I was going to remind him (in annoying Mom fashion) that he had his part of the dishwasher to unload. (Never mind that an hour before he said he'd remember without a reminder) When I called, "Isaac!" The Isaac Monster bellowed, "WHAT?!" Me: "Go to your room!"


I'll sum up: Growl, stomp, stomp, stomp SLAM!! I paused my DVD and went to talk to him. My natural tendency is if I can't win by reason, go for volume. As of late I've endeavored to make the reasoning moments stretch out for longer periods before the eventual yelling. It's REALLY hard. (boo-hoo!) Isaac and I conversed on how his behavior is unacceptable and I would call his friend's mother and cancel the plans if it continued. This appeared to work. But I've been here before. As expected, the stomping, growling, yelling and crying all resumed - over what I can't remember. This was me by 11:00 a.m.:

Only because we'd rescheduled plans with this particular friend three times before was she allowed to come over. It was actually good for me because the Isaac Monster was out of my hair. Towards the end of the afternoon while they played, I popped in Shiva Rea Yoga Shakti DVD. My back has been killing me and I needed a boost. For an hour I flowed through sun-salutations, back bends and stretches and managed to go from totally exhausted to just plain tired. It was 4:00 when I finished. After putting my regular clothes back on, I was informed that the Isaac Monster had something unsavory to say about yoga. I never got the specifics, but that was it. We took his friend home. I stopped at the grocery store on the way back so I could procure all the ingredients for my "bowl full of hugs" dinner. Mentally I felt as though I'd just gone ten rounds with Muhammad Ali and needed to be wrapped in comfort.

Ben was happy with dinner when he got home  - a little less so at having to run to the liquor store to replenish our vodka, but he understood completely. Since he's known me for the better part of two decades he knew I needed to laugh. Every Friday night he gets together with his buddies for rounds of video golf. Sometimes they watch stand up. They watched most of Bill Burr's Let it Go on Friday. I LOVE Bill Burr. When he returned and all children were in bed, he put on Let it Go. I guffawed until my stomach hurt for an hour then; then I peeled myself off the couch and traversed the stairs to bed at the late hour of 8:00. The rest of the weekend went smoothly as Isaac was returned to me Sunday morning; but he spent the day in his room. He was allowed to come outside while Ben and I did yard work for a couple of hours, and we did feed him at the table. He was a gem all Sunday - not a single stomp, yell, or growl.

You may or may not have noticed there's a new countdown. I've not been able to think of a replacement for the countdown yet. Good thing there there's stuff I'm looking forward to that has yet to happen!

One of the downfalls of living all over the country this past decade is that I've not seen much of my family. One sister hasn't met Shiloh yet, and hasn't seen Isaac in several years. Another sister hasn't met either Isaac or Shiloh. Both sisters are going to be at my parents' over the Easter weekend. I am NOT a religious person, but I do love holidays because they are magnets for families that don't see each other often. No matter what, there is a holiday that brings everyone together. While growing up that holiday was Christmas. As of right now there is no designated holiday that brings us together - it's whatever works for peoples' schedules. But it is always a holiday. This year's positive charge to mine and my family's negative charge is Easter.

Since I am fortunate enough to have been spawned from a pretty cool gene pool, this weekend looks to be quite a joyous occasion. Also, we're Irish. One thing at which us Irish excel it's having a good time! I'm also looking forward to getting a way, if only for a couple of days. A little de-stresser is order - and tossing back a couple with loved ones I've not seen in too long sounds perfect!

Today's offering comes from yours truly! It was taste-tested last night and passed. Ben said it was "good". But I like Isaac's reaction better. He declared, "This is awesome. You should make a cookbook and put this in it!" I just love how simple everything seems when you're seven! I'll get right on that, son...

Heat two tablespoons of oil in a large non-stick pot over medium high heat. Season chicken boobies with salt and pepper then dust with flour. Sear boobies in batches, using remaining olive oil for second batch, until your they're favorite color (golden brown in case amnesia set in) on all sides. Put aside. Add more olive oil if necessary, then scatter the shallots amongst the yummy brown bits in the pan and stir. Breathe in that lovely onion scent. When they begin to soften, about three minutes, sprinkle the in the garlic. Breath again - mmmmmmm. When garlic is aromatic get the wine - make sure you have enough for yourself as well - and pour. Let most of the wine evaporate then add chicken broth. Bring to simmer then time for the tomatoes and thyme. Pour, sprinkle and stir. Return to a simmer, grab those boobies - where did you leave them again? Return them to the pot and cook for about thirty-five minutes. Always a good idea to rip fattest part of booby apart to be sure there's no pink in the middle. While checking doneness pour in the heavy cream, season with salt and pepper, stir. Return chicken to pot and, you guessed it, stir again! Let simmer for another two minutes, or so just to make sure everything is hot. To thicken the sauce whisk in a couple of tablespoons of flour. Then remove from heat and devour! 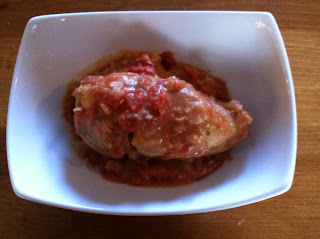