Ours was a joyous success. Ben even surprised me with three Calphalon pieces - a panini pan with weight, a three-quart saute pan, and a five-quart sauce pot! I got him a book about the Higgs Boson particle. A bestie gave me some money to buy Ben a bottle of his favorite alcohol; I covered the balance.

I spent just under two hours at Target last Friday on Santa Detail. The piece de resistance of Shiloh's gifts is this Fisher Price Pizza Table: 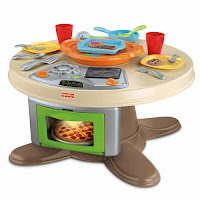 The MOST awesome feature (in this OCD neatnik's humble opinion) is that the center is hollow and all the little pieces can be stored inside, transforming it to a toddler table:

There was one left on the shelf, and nary a price to be found. My spending limit for this item was $69.99. I hunted down an associate. He was actually pleasant, given that the store was swimming with patrons in the same boat as I. He brought his nifty scanner gun and blasted the read-ray at the toy's barcode.

I picked out some new pajamas for Isaac, construction paper, colored pencils and myriad other art supplies. I snagged some non-Christmas items and left. On the drive home, I fretted ever-so-slightly about where to hide the abundance of gifts. Our closet isn't an option as Shiloh barges in there every day to try on my shoes. I pulled into the drive, parked and bustled into the mud room. I gazed upon the the mish-mesh of things (a toddler bed standing upright, some plastic boxes, the wood entertainment center that now just houses assorted tools and their accessories) and realized it was the perfect hiding place for plastic Target bags! The kids never pay any attention to the clutter when they barrel through the mud room to the kitchen. For once I was glad for the mess I despise! So I hid the bags amongst the clutter. They were never the wiser.

Christmas Eve day was surprising treat! We had a bunch of shopping to finish and I wanted to catch up on my baking. I also had dinner to cook and presents to wrap. We got a head start on the shopping. I decided I wanted to be fancy, so I showered and squeezed my expanded girth into my denim skirt, favorite Guess sweater and wool hoodie I wore to meet Giada, tights and black Steve Madden boots. I dolled Shiloh up in a black corduroy jumper with pink satin trim, layered over a black turtleneck. Ben was dressed in his best hoodie and Isaac in his fanciest T-shirt and flannel. Quite the shopping party. But we went our separate ways most of the time - I went into another Target with Shiloh to round out some presents whilst Ben took Isaac to Macy's and shopped for me. We stopped at my liquor store so Ben could grab a generic brand of Bailey's for our coffee Christmas morning, then we stopped at the Hannaford plaza so I could go to the grocery store and he could go to Ocean State Job lot for stocking stuff. We were home before noon! I baked all afternoon in my good clothes and didn't spill once! For dinner I made this yummy chicken parmigiana, courtesy of The Pioneer Woman. It was simple, scrumptious but I think it was missing something. I'm going to play with it in the future. She does stress the importance of using "good parmigiano reggiano" - I had only mediocre "Parmesan". She says that either red or white wine can be used. I'll use red the next time. I think it will coax out a richer flavor - or something.

But everyone glommed down dinner. Ben and Isaac went to the Christmas Eve service at the church down the street. (Gasp!) Yes, they went to church. Isaac liked the service last year (I think it's because he got to hold a lit candle and light another one with it). But Isaac did Mommy proud while there. Ben told me he started reading a Bible. More specifically he read about when God created Earth. He's well-acquainted with outer space, especially for someone his age. He and Ben have watched a plethora of episodes of "How the Universe Works", "Through the Wormhole", "Universe"... you get the idea. When he started reading the passages of God creating everything, he said to Ben: "Daddy, I don't get it. The solar system was formed from a super-nova." Good boy.

Whilst they were there I uncovered a problem. After I put Shiloh down, I dug out the wrapping paper and discovered we had no tape. None. Zip. Zero. Zilch. I snagged Isaac's clear Elmer's glue and started wrapping the stocking presents. The glue held. I was about six presents in whence I realized there were price stickers on them! Isaac would surely question that. I stuffed all I'd done aside before Ben and Isaac walked in, then called CVS. The very upbeat associate who answered the phone said they'd be open until ten. Off Ben went for tape. Isaac got himself into his jammies and brushed his teeth. After Ben got home, he read "A Night Before Christmas" to him, then tucked him in. We put on TBS for the "A Christmas Story" marathon and got busy wrapping. We crawled into bed at around 12:30 a.m.

Isaac and Shiloh were definitely the magic of the season! Isaac still believes in Santa and while Shiloh doesn't fully comprehend what's going on, she knew it was a special day. Isaac bounded out of bed at 7:00, we were all down there by 7:20. The cinnamon rolls were popped into the oven to sit for a half hour over a pan steaming water. Then they baked for half hour after that. Isaac tore through his stocking (I let him go through mine), and he "helped" Shiloh with hers. After cinnamon rolls and sausage (healthy, I know) we all retired to the living room before Isaac's head exploded. About forty-five minutes later most of the presents were unwrapped.

Since the start of a Calphalon cooking set was my big gift, there was no new camera. With Ben at the helm of his phone camera, not many photos were taken. In fact, below are the only two. 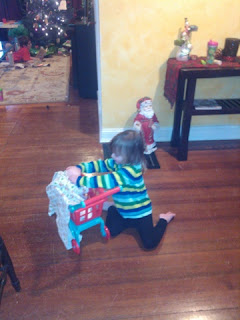 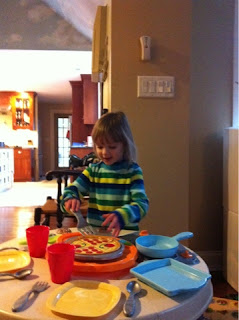 Shiloh spent the day serving us ice cream and pizza from her little table. See how she's tucking her little dolly into the cart with a blankie? Awwww. Cute, right? Well, when she yanked the dolly out and chucked it AND the cart across the living room, those toys were removed from her field of vision.

Isaac devoured two of the nine books in the "Judy Moody" book collection and actually sat and watched all of "A Christmas Story".

To round out the day I put on my Merry Homemaker Rubber Gloves and scrubbed the bathrooms, and cleaned the kitchen floor. Then I cleaned myself and got the pot roast started. It came out perfectly - succulent and tender. The gravy was perfect, thick but not clumpy. Mashed potatoes were the side. A meat-lovers heaven!

Ben went to get Mummy (aka the awesomest life-saver in the universe) from the train station at around 8:15. They returned by 9:45ish. She arrived with my favorite cookies in tow. I fed her some dinner, which she also loved, and we all chatted for a bit before turning in.

Tomorrow I will regale you with the recipes for Mummy's cookies AND have a Football Sunday delight!