May 08, 2013
How's everyone been? I've been quite busy - hence the time lag between blog posts. I actually started this post on Friday and it was supposed to be a "Week's Wrap-Up" - I'm just now getting to finish it. (With some adjustments)

I've said it before - I'm not the mother I'd always envisioned myself being. An occurrence last week reinforced this fact - but it was the catalyst for a mature conversation between myself and Isaac (as mature a conversation that can be held with a eight-and-three-quarters-boy, anyway). I love to blame my "Irishness" for my lack temper-control - but I'm starting to feel more, and more that's a cop-out. Especially when dealing with my children. The first step to correcting a problem is recognition, is it not? So, I recognize and will keep working on it.

Isaac's switch flipped last Wednesday afternoon. He went from his normal loving state to the Isaac Monster. Gratefully, the Isaac Monster has mellowed with age (thank you, universe!!) But amidst his anger he bellowed, "You're the worst mother in the world!" - right in line with a boy his age throwing a fit. Being portrait of cool-collected maturity, I escorted him quietly to his room.... (don't I wish!) No. I responded, "Well you're the worst son in the world." (I know, I know...)

Water-works ensued and he then yelled about something from months ago - when he'd overheard me venting about him (after I discovered he'd heard me, I appropriately groveled and apologized; he accepted the apology). After he threw the incident back in my face, I sent him to his room for the night - he stormed off. About an hour later when I put Shiloh to bed (and had calmed down) I checked in to see if he wanted to talk. He snotty attitude indicated he clearly wasn't ready. We went to bed angry with each other.

Sleep is a glorious thing. Not only is it akin to time travel (especially if insomnia isn't a constant companion) but it's ameliorating affect on negativity is wondrous! Isaac was back and I had a firm grasp on the reins of appropriate parental behavior. We apologized to each other for the mean things we said. I also said that he has to work harder at not saying the mean things he doesn't mean when he's angry. I said I will work harder to remember that I'm the adult, and my reacting badly is worse. I also FYI'd him: "When you accept an apology from someone, it is inappropriate to bring it up in future arguments. Accepting an apology means you accept it and move on." He said, "Okay. I understand." We hugged and I made him breakfast. Awwww - a Hallmark moment if ever there was one. Later that evening we had another tiff; and he proclaimed, "You're the worst." I just smiled and said, "Thank you."

A few days ago I was going through my Twitter feed, and a follower posted these links:

Because of these, I've stepped up my tweaking efforts for my YA manuscript After the Crash. A couple of months ago colleague at work who blogs for www.bleacherreport.com, and read Reality Check, asked when he was going to see more of my writing. I mentioned he could read more of the blog, but he was interested in the fiction. So when I got home that day, I opened up and started perusing through the manuscript I'd ignored for months. It was a revelation! I blew through the first chapter and made numerous improvements before sending it off to him. I was inspired to continue, and have been at a a leisurely pace. I've improved several weak areas that'd had me confounded and am now on warp speed. I hope to finish it up this weekend and get it out. Since the majority of publishing houses prefer submissions through literary agents, it'd be thrilling if one of them were interested! We'll see.

I also managed to perfect my cookie recipe. Someone at work who's always happy to sample my food actually called me from his office to say he thought the cookie was awesome. He asked if there were cherries in it (whence I was mulling this recipe over I actually did want to use cherries, but I kept forgetting to procure some from the grocery store) I was on cloud 9. I'm saving the cherries for an Oatmeal Chocolate Chunk and Cherry cookie I'd like to take for a test drive. Another flattering compliment came was from a nice lady who said I should start this as a business and cater the company lunches. Shucks!


TIME FOR SOMETHING SWEET! 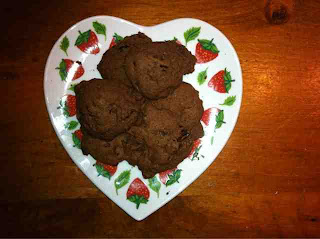 Even their name is quite a mouthful! When I've made double chocolate chip cookies in the past, they always called for adding cocoa powder to the dry ingredients; yet nothing was added to the wet. They always came out dry, and quite honestly, not chocolatey enough for yours truly. So in a random Alicia-Silverstone-in-front-of-the-fountain-at-the-end-of-Clueless moment, I recalled a step from Giada's Chocolate Chip Poundcake I've made several times. Lo-and-behold I dashed for the kitchen and donned my metaphorical Little Black Susie Homemaker Apron (seriously I should TM that and team up with a talented seamstress and start my own line! But maybe I should change it to Little Black Meghan Homemaker Apron.... nah, that doesn't have the same ring). ANYWAY... The step I jacked from that recipe is melting squares of unsweetened bakers chocolate with water, then adding mascarpone (say it with me... MAH-SCAR-PONY) to that mixture. Mascarpone - it should be renamed "The Magical, Wonderful Cheese That Can do Anything". Huh? Huh? What, too long? Probably. The cranberries add a tart, chewy bite that complements the decadent, chocolate flavor perfectly. If you make them, do let me know what you think!!

In a small saucepan, combine the chocolate squares and water. When it's melted it should resemble mud - stir it to ensure it's smooth. Let cool for a few minutes then stir in the mascarpone.

Sift all the dry ingredients together in an adequately-sized bowl.

Plop, plop plop! That's the butter and sugars plopping into the bowl of an electric mixer. Whip them with the paddle (sounds violent, doesn't it?) until light and fluffy. Add the eggs and vanilla. Keep the mixer speed on medium and alternate adding the dry ingredients and the chocolate-mascarpone mixture.
Then add the chocolate chips and cranberries.

Dollop spoonfuls of batter across baking sheets and bake for 10 - 11 minutes. Let cool for as long as your self-control allows then enjoy!