Isaac's Trip; A Wicked Night Out

July 25, 2013
Today is my kind of day - not quite seventy, cool and overcast. There's been some rain mixed with the sun today. But this is a blessing compared to gross, moist heating blanket that draped itself around the Northeast all last week.

Not only did I get to reconnect with dear friends on a day off last week, Isaac was with my parents. Mummy asked a couple of months ago to take him for a week this month, and everyone was on board! Isaac loves his Gammy - and she was dying to get some Isaac time.  Neither of us thought that Shiloh was ready for an entire week without me, so I wasn't completely childless last week.

Mummy called from the grocery store asking about Isaac's favorite foods. I gave her the healthier choices (everything bagels, pretzel chips, bagel chips, Pop Chips) since I knew their house was already teeming with all the snacks and sugary cereals that grace our pantry only on a very limited basis. Isaac did his little giddy-jiggle when I told him Gammy was asking about his favorite foods.

On the 14th we met my parents in Lee, which is smack dab in between our towns. It's roughly two-and-half hours for each of us to get there. Shiloh did amazingly well - no screaming; Isaac asked "Are we there yet?" only three times. We met at Friendly's, and since yours truly was turning 25 for the 11th time on the 15th, my parents were kind enough to buy us lunch.

After lunch, and Isaac took off with my parents, I indulged in a Peanut Butter Cup Sundae before the return trip. I was aghast when after giving my order to the young girl, she asked, "Would you like three scoops or five?" "Whhhaaaaa?!" Three scoops or FIVE. Jeez! "Um, can I have two small scoops?" She said no then slammed the window in my face... Just kidding. Ten minutes later she came back with my perfect-sized sundae and Ben's coffee Fribble and we were off (nuh-nuh-nuh-na-na-nuuuuuh). Shiloh was quite insistent on sharing my sundae and, of course, eating the peanut butter cup.

It took Shiloh a day or so to get used to Isaac not being around. When I got her out of her crib last Monday, she scampered into Isaac's room demanding, "Isaac! Get up!" Then it was ten minutes of "Where's Isaac?" Aside from the disconcerting peace of no background chatter, what stood out the most about Isaac's absence was the milk. A gallon was purchased the day before we dropped him off and it only disappeared by half. He sucks down about 2.5 gallons of milk each week.

Mumsy sent some pics from their various outings. Isaac was in heaven - taken on trips, didn't have to go to bed until nine, and the JUNK food! It was a bit jarring for him to return to reality: I still won't but Cinnamon Toast Crunch on a regular basis, even though he read the ingredients and they're made from whole grains. 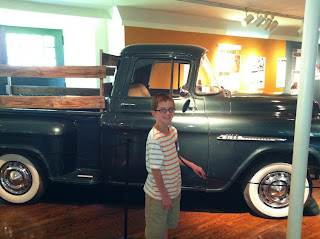 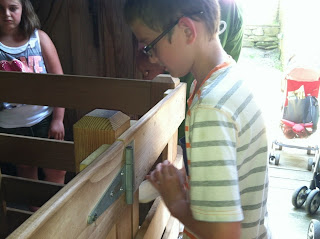 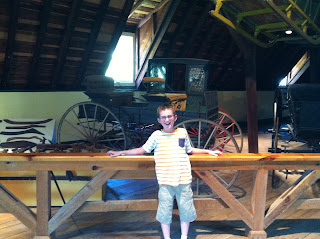 
The souvenirs Isaac procured for us were quite thoughtful! A teeny stuffed fox for Shiloh, a baseball hat for Ben and a scented, decorative fan for me! I was rather surprised by my gift - I LOVE decorative fans and had no idea Isaac was aware.


My actual birthday was like any other work day. But that seems to be the case as we get older, does it not? Just another day. The following day was the surprise shower. Friday, though was a "wicked" good time! This was especially fun for me because I never get to go out. I'm always the one who has to get the kids. A friend at work and I have been trying to get together for drinks for a few months now, but the days never panned out. Then we agreed on Friday the nineteenth he'd take me out for some b-day drinks. I asked a few others to join us, but only my biggest fan was a definite yes. My friend treating me said let me know the night before another colleague was a-go!

I arranged it so I worked until close (had to make up the hours for taking the day off for the shower) and Ben picked up Shiloh from daycare. At five on the dot I scooted on over to the Longhorn Steakhouse that's nearby and was the first one there. Ahem. I bought my first drink. Whilst perched upon the bar seat at a table, I recognized the purty visage of a girl who'd tendered her resignation about a week before, seated alone at nearby table. We started chatting loudly, then I moved to her table so we didn't to yell. She was there to meet her former boss who's trying to convince her to come back. Color me happy. He's pretty awesome and hilarious.

Within ten minutes or so, our table filled up and it was time to get the drink on! Later on another person from work showed up - it was a complete coincidence; she was just there with her boyfriend. When the waitress told me she couldn't serve me any more it was time to go. We were then off to another spot - a hangout of the late-comer and her boyfriend's. I was given a ride over, since I wasn't really in any condition to drive at that time. I had several glasses of water and two more drinks over the next two hours of raucous laughter. By the time I was dropped back at my vehicle I was good to go. Definitely not as young as I used to be, because upon my arrival at home, I went straight to bed. Gobs of fun I hope to have again soon!