July 16, 2013
You know how sometimes you don't realize you need something until it's thrust upon you? Well today's day off was exactly that for me. Since I like my job and the people I interact with on a regular basis, work is enjoyable for me. But it's still work. This realization dawned on me as I laid in bed this morning - blissfully NOT in a rush to get the day underway! After rolling out of bed due to Shiloh's cajoling, I spent time happily folding laundry and attending to some other chores, followed by time on the computer doing social-media things I don't normally have the time (or inclination) for since I'm on the computer at work.

I believe the universe speaks, and it screamed for me to take this particular day off. Super Friend, whom I haven't seen since there was snow on the ground, created a FB page for the surprise baby shower she was throwing for another mutual friend, who I haven't seen in just and long - AND had no idea was pregnant - for this day beginning at 11:00. When I saw the date and time, I grumbled about not being able to attend because of work. A bit later that day, like an errant marble, the thought of actually taking the day OFF started rattling around within the cavernous space between my ears. When I picked up Shiloh from daycare, Jess said that she needed to take today off for some appointments and would be closed. Message heard, loud and clear!

The shower was originally to take place at Super Friend's house, but she moved it to a local indoor play land, Boomers, because of the obnoxious summer weather. I dallied about this morning until 10:00, whence I lit a fire under my posterior because I was still in my scary state of no make-up, and Shiloh needed a bath. Forty-five minutes worth of a cartoon flurry of windmilling arms later, we were ready to bolt.

Boomers was the perfect location - the kiddos got to burn off all that energy I wish I had a method of bottling and selling, and we all got to relax and catch up in the comfort of central air. As soon as we arrived, Shiloh tried to bolt before I could cover her feet with socks. I checked us in then meandered back to the party rooms that were reserved for us. Super Friend and some other ladies I haven't seen in ages were there finishing up decorations. Super Friend even made this: 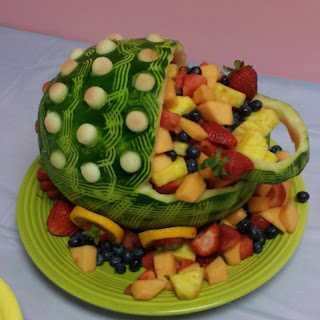 The guest of honor arrived at 11:30. The look of startled confusion on her face was priceless! She was positively lovely with her expectant glow! Given how often I've professed to never wanting to have another child, I was rather disconcerted whence the envy gremlin started nibbling away. The meltdown that Shiloh had when it was time to leave gave him something else to snack on. But, per usual, as soon as we were in the Jeep and underway, she calmed down. Whence we got home she went down for a nap, as did I. Then she awoke, I did some kickboxing and she's persistently insisting on "More Caillou. Pleeeeeeease!" What a glorious day off!

Back to the grind tomorrow - all refreshed!

Hope all is well with you!