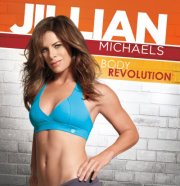 So this is day four on JM Body Revolution program. Like I mentioned in the "What's for Dinner?" section of "On my DVR" I've started with the "Kick-Start Your Metabolism" menu and exercise regimen. The menu says I can lose up to one jean size in a week, and my stomach is actually flatter after four days. Since proper nutrition and eating habits combined with exercise are Jillian's keys to success, the diet isn't horribly restrictive. The only difference between this week and the rest of the program are there are no, fruits, flour, grains or sugar and only one serving of low fat dairy per day. The menu for the rest of the program is nicely varied - even some yummy muffins for breakfast! I've made some of the muffins before and they're delicious. Since I'm going through a baking withdrawal, Monday can't get here fast enough. I do have a fix for the withdrawal - baking Isaac's birthday cookie-cake this week. Christi (Super Friend) is a professionally trained chef (how lucky am I to have such talented friends?!) is going to help me with icing and decorating it. We're having a little BBQ for his birthday and Memorial Day, so I've set myself up for a challenge with regards to food. Ben even asked me before leaving for work this morning what am I going to eat at the BBQ. I opened the extended menu to the lunch section and joked, "Salmon-stuffed pita pockets." Taking me seriously, he replied it would be anti-social to invite people over and eat something different than them. I rolled my eyes, flipped a page and found chili-lime shrimp skewers with pineapple-mint salsa. The recipe if for four so anyone else is welcome to them. I'll have some of the green salad and possibly indulge in a teensey-weensey square of the cookie-cake. Ohhh, maybe not. I just saw a snack of chocolate-cinnamon frozen banana pops.

The exercise program requires workouts six days a week. Four circuit training days and two cardio; and the workouts are a half an hour long. The only difference between the exercise program for this week is that there is an extra cardio session included on the circuit training days. I've completed the first two days of circuit and cardio combined. They weren't as difficult as the Level 4 workout on her Ripped in 30; and I was thrilled I could complete the programs doing the advanced modifications. But I did awake with sore muscles the day after completing the first session. These first weeks are laying the groundwork for the tougher workouts, which for sure will be a battle. Since I am ambitious, I'll most likely do the cardio DVDs as well as the circuit DVDs for the duration of the program. I may throw in a yoga session on the cardio days as well. Today is a cardio day, and even though the fitness guide says to use the cardio DVD from the program, I felt like dancing. So my dancey-dance kickbox DVD was my cardio today. It's been nearly two weeks since I last did it and it kicked my butt!

One thing I've had to pay more attention to are the thoughtless snacks. I don't mean pulling out the box of Triscuits and a tub of hummus and mowing between lunch and dinner, although that certainly didn't help keep the weight off. That was a conscious decision. Since I was young I've had a habit of eating a handful of dry cereal before pouring it into the bowl and adding milk. So grabbing dry cereal as I pour it is now reflexive. Cereal isn't my breakfast anymore, but it is for Isaac and Shiloh likes Rice Chex in her gyro bowl to snack on. I've caught myself snagging a few squares when I pour them, and had to put them back. I made dirty risotto for everyone else's dinner last night, as I made my dinners and lunches for the rest of the week. It took every ounce of self control to only test a few granules of the Arborio rice to assess its doneness, instead of shoveling gigantic spoonfuls into my mouth like I wanted to.

Initially when I ordered the program I was planning to use the diet portion for a month, or until I reached my magic number of 130. But right now I feel so great I'll endeavor to go the full 90 days. I understand it's only the fourth day of the first week and it will get harder to stick to it as I get sick of the strictness of the diet. I'll just have to keep reminding myself that it's a limited amount of time. I can go back to an occasional indulgent day after I'm done; but I'm embarking on a complete mind-body transformation here so my goal is to make this stick. I realize that making anything prohibited for life is setting myself up for failure and feeling guilty about the inevitable future days of excess calories is useless.

I never had any doubt about completing the entire exercise regimen. Exercising has never been a problem for me. But hitting 130 is no longer the main motivator. Oh I want the number, don't get me wrong. But Jillian jumped to standing from being on her knees in the second DVD. I've always admired this move when watching martial arts movies. Now I want to do this! On my goal list this is the one above 130. If ever the thought of not finishing the exercise regimen flits through my brain, I'll focus on that move that and it should disappear.

Whilst perusing yesterday's posting for grammatical errors, it hit me that I completely forgot to mention the one other show in my summertime DVR lineup. Doctor Who. Ahhhhh. Matt Smith is exactly my kind of guy. Well at least his interpretation of the Doctor is. He's geeky-hot, super-smart and supremely bizarre. Perfect combination in my humble opinion. Now I've never seen any other Doctor Who so I really can't make a comparison to the previous actors. I don't know if the Doctor is always supremely bizarre, or what. My favorite episodes, that I can think of off the top of my head, are the two-parter Time of the Angels and The Lodger. Time of the Angels is creepy-suspenseful and The Lodger outright hysterical. The Lodger showcases Matt Smith's comedic abilities, and shows just how "off" the Doctor is to humans. I love Karen Gillan - she's a firey Scottish redhead (completely original way to describe a redhead, I know). Her character Amy Pond is the perfect companion for this Doctor, and her bit-a-bumbler fiancée Rory (played adroitly by Arthur Darvill) is perfect for her. The cherry on this sundae is Alex Kingston as River Song. She's beguiling, sexy, mysterious and brilliant - what woman wouldn't want to be her? I was thrilled to see her on TV again - and in role that is a complete 180 from Dr. Elizabeth Corday.

Tonight I bring you something simple, quick and yummy. Using whole wheat pasta will make it healthier. Shrimp with Linguine and Lemon Oil. Last week was the first time in a while I'd made it and Ben scarfed it down. He actually thought it was pad thai. (Haven't gone Asian with my cooking yet!) I substituted baby spinach for the arugula - healthier still! Yum!