May 17, 2012
I don't know about anyone else, but I went through phases before I found the genre of music that works for me. My first phase was pop. Debbie Gibson was the bees' knees for me! Out of the Blue, Electric Youth, and Anything is Possible were the greatest albums as far as I was concerned. Body Mind Soul is a later album I remember playing to death as well. Whilst treading water in the ocean of my pop obsession I, of course, was TOTALLY devoted to the first boy band...NKOTB! Oh yes. Danny, Donnie, Joe, Jon, and Jordan were plastered all over my bedroom walls. My eldest sister even got tickets to one of their concerts as birthday presets for my younger sister and me. My very first concert! I also remember shoving the Newsweek (I think it was Newsweek) with NKOTB on the cover and the question "Bigger than The Beatles?" in my parents' face and declaring "Of course they're bigger than The Beatles!" Never mind I really didn't know anything about The Beatles at that time.

As I got older I left pop behind in favor of classic rock. Led Zepplin became a new obsession. A friend of mine lent me his cassette tape of Led Zepplin IV and I played it so much I actually wore it out. (Gosh Isaac has no idea what a cassette tape is!) Classic rock was only a stepping stone to what is now my preferred genre - alternative. I never really got on the Nirvana band wagon, but I did hop the Pearl Jam band wagon. Ten was an album that lived in my car's CD player for a while. So did Throwing Copper by Live. Ben was sooooooooo sick of them by the time I was done repeating the album endlessly. Then enter Garbage. 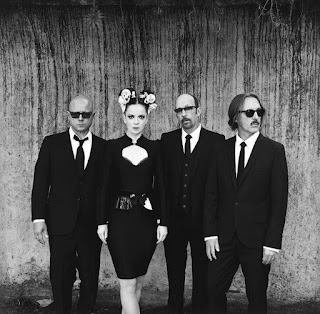 Garbage is my favorite band. Ever. The first time I heard I'm Only Happy When it Rains I was hooked. They pretty much created their own genre of music by mixing together all others. Their ability to combine a cacophony of sounds into a menagerie of melodies is unsurpassed. And Shirley Manson has the sultriest voice with an amazing range. She'll move seamlessly from purring seductively, to bellowing with rage, then on to a serenading lullaby. She's a confident, sexy and unique person; this is showcased in her style. I love it. She's also uncompromising. In this profile Shirley mentions that while working on a solo album, the executives at Geffen wanted her to make a record that "sounded like Annie Lenox". And she quit making making music instead of bowing to the pressure. They started their own label to put out their newest album, Not Your Kind of People. Their music would comprise a soundtrack for my life. This review of Not Your Kind of People is pretty accurate, but I would say that Blood for Poppies and I Hate Love are the two best songs...

On to a mini-epiphany. Since I consider myself to be an open-minded person, it's eye-opening for me when I discover my own prejudices. Hubris of my liberal mind, I guess, to believe that just because there are some things on which I consider myself forward-thinking, I am the epitome of the non-judgmental person. I am grateful that the prejudices I've uncovered are mostly over superfluous things, like music. Some genres of music - rap/hip-hop, country, and today's pop - I considered beneath my divine notice. There are, of course, a few artists in every genre that stand out and I'm not so arrogant that I don't recognize that. I don't know any of today's country music but I LOVE Willie Nelson and appreciate Johnny Cash. And until I saw The Hangover I had absolutely NO use for rap/hip-hop. But the director's, Todd Phillips, taste in music is above par. I discovered this after watching Road Trip. I am a road-tripping person at heart, and that soundtrack is great for such an excursion. ANYWAY... Every song on The Hangover is excellent. Just before the credits roll, pictures of the night the guys in The Hangover forgot flash across the screen to Flo Rida's Right Round. I was sold. He can string together lyrics and rhymes like nobody's business; and as a writer that holds the utmost appeal for me. This was the first song I purchased on my iPhone. His newest single Whistle is a groovy, summer-embodying song, definitely geared toward the fairer sex. I can't recall that last time a song just made me feel hopping in a convertible with the top down, in a bikini, and head on off to a beach party.

So now that I've had my eyes opened to the fact that good music transcends genres, please share with me any songs you love so I can continue filling up my iPod!!


WHAT'S FOR DINNER?
I have a few days until my JM Body Revolution arrives. I've been wallowing in over-indulgence until it arrives, and tonight's dinner shows exactly that. I perfected my Chicken Milanese. (I prefer saying that to fried chicken... it sounds fancier:) And because of my Irish heritage my potatoes have always been tip-top; and the best accompaniment to mashed potatoes for me is corn. I have also served lemon risotto as a side depending on my mood. (I have yet to serve the risotto inside a lemon) Listen to your heart...I learned a little trick to determining the oil temperature from this video. Heat the oil in a pan and place a wooden spoon in the oil. If it starts bubbling immediately around the spoon you're good to go. Since I don't own an oil thermometer I'm glad to know this! And it works. 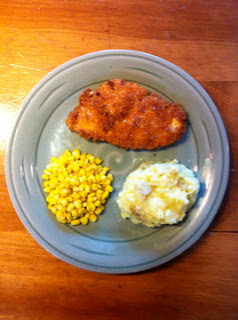 2 Eggs
Hot sauce
1 c flour
1/2 TBSP Smoked Paprika
1/2 TBSP Cayenne Pepper
1 c Panko
Kosher salt
Feel free to adjust the amounts to your tastes. Mix the flour, smoked paprika, and cayenne pepper in one bowl. Scramble the eggs with a few shakes of your favorite hot sauce in another bowl. Pour the panko in a third bowl. Dredge one cutlet in the flour mixture, then the egg mixture, then the bread crumbs. Complete with the rest of the chicken (in case you didn't know). When the oil is ready place the chicken in and let cook for three minutes a side. Remove to paper towels, and sprinkle with some Kosher salt. Aside from the flavor the spices and hot sauce add, the color of the breading when it's finished cooking is like a beautiful sunset. Yum!