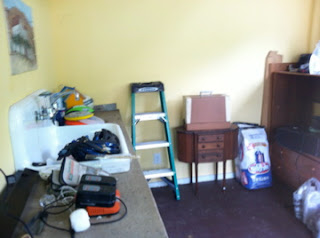 Today we celebrate mothers; and those of us who are mothers are supposed to be catered to by our families. Today was a relatively light day for me - I only had to make the home fries for breakfast, took a light nap, ran to the grocery store and am almost done with the laundry. Ben made an acceptable dent in the disaster of our mud room which completely made the day for me: 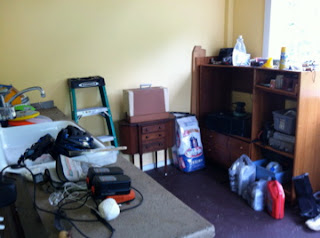 Yesterday, as I was performing the most swanky of chores (scrubbing the toilet) my curiosity was piqued as to the origins of Mother's Day. I discovered how it came into being after thorough investigation (translation: I Googled Mother's Day origins and followed this link). But here's a summation of what I read:

While mothers are celebrated throughout the world and these traditions can be traced back to festivals of ancient civilizations, the modern Mother's Day is an American invention, not directly descended from these traditions. In 1870 a woman by the name of Julie Ward Howe was the first person to proclaim Mother's Day. This was her pacifist reaction to the American Civil and Franco Prussian Wars. But it was first celebrated in 1908 when a woman by the name of Anna Jarvis held a memorial for her mother, then campaigned to make Mother's Day a national holiday. She was successful by 1914 and disappointed with its commercialization by the 1920s. Mother's Day was adopted by other countries and is now celebrated throughout the world. Interesting...


Although the commercialization of Mother's Day is prevalent, that doesn't have to negate the sentiment. All holidays are used by marketing departments as a vehicle to make products more appealing. For the past two weeks my inbox was inundated with e-mails for all sorts of Mother's Day deals. And I'm not above accepting presents, or even indicating what present I would like. Flowers, pajamas or chocolate have no interest for me. Well chocolate ALWAYS has an interest for me, but that doesn't make it special so it wouldn't be a great present for me. What I do have a great interest in - okay obsession with - is losing these last few pounds once and for all. While I have all the tools and knowledge, that isn't  enough. I can't get my head in the game with everything I have. I need new packaging for all the information I have and to shake things up a bit. I had this realization after seeing my friend Maria's FB posting last week about how sore she was after her session at Cross Fit. Even though gyms aren't for me, I could do Cross Fit. Everyone would be focused on the same thing and that would  alleviate my paranoia enough for me to attend. The thought of throwing something new into my workout rotation and meeting other fitness-minded, exercise junkies really got me pumped. Then I looked into a Cross Fit near me and saw the cost. Not this year.

As I revealed in my Fitness posting, Jillian Michaels is my fitness hero. I get all the updates on her goings-on through FB and have had my eye on her 90-day program Jillian Michaels Body Revolution for a few months. This is a comprehensive workout and diet plan. The workouts are divided into three phases, with a total of fifteen DVDs. Also included are a resistance strap and recipe plan. There are some other incidentals throw in, like a food journal and free 30 day subscription to her online program. I entered a giveaway but didn't win. A $20 off offer was sent out to all who entered the giveaway. I got the green light from Ben to order it for Mother's Day. Looks like Howard Stern is going to have to wait a little longer.

So my Mother's Day gift is kicking to the curb an obsession that's been driving me crazy for months! I'm totally psyched. I have at minimum at week before it gets here. Wishing for a fast-forward button won't do me any good so I'm just going to make the most of what I have until its arrival. I anticipate that by my birthday in mid-July this obsession will be downgraded to an irritant.

What did all you Mommies out there get for your special day? Besides the adoration of your children, I mean...

I love shrimp. This wasn't always the case. But now I do. They're versatile and always quick to cook, making them ideal for weeknight meals. This Baked Shrimp with Tomatoes and Feta is fabulous. I found it was even more fabulous two weeks ago with the addition of a few shakes of crushed red pepper and serving it over whole wheat orzo. The orzo makes it more filling and the red pepper adds a bit of heat. Delicious!