Hurricane Sandy, Halloween Post-Script and are Those Bells Jingling?

November 03, 2012
As I sit snuggled on my comfy couch, laptop atop my lap, I can hardly believe Monday was only five days ago! Nothing like a little natural disaster to mess with one's internal barometer. I'm so grateful that our little corner of the country missed the brunt of Sandy's wrath. Some trees were knocked over around town, we had some minor flooding in our basement and our power went out for a matter of minutes. We were fortunate. How did you fare?

We did manage to have a wonderful Halloween - especially since I sent my grumpy old lady packing and got in on some family fun. I of course remembered to make time to watch the most romantic movie ever - The Crow. I don't watch this movie only around Halloween, but always around Halloween. The girl-narrator says, "If two people are meant to be together, nothing can keep them apart." Even though this is a romantic sentiment, I am a pragmatic person, who believes in infinite possibilities. When I voiced my agreement with that statement, Ben said, "Wooooooow. Underneath all that Irish hardness, you are a romantic." Or something to that affect. I immediately rebuffed such nonsense. I am not a romantic - just an acknowledger of every plausible scenario. A funny little post-script to Halloween - Shiloh's daycare provider realized that she had the ladybug costume! She told me when I picked Shiloh up yesterday. Several months ago, before she had her daughter, we gave her some large bags filled with clothes that didn't fit Shiloh anymore and the costume was amongst them.

Now that Halloween is done, it's time for the onslaught of Christmas advertising - and if there's one time of the year advertisers salivate over, it's Christmas. I witnessed my first holiday commercial; it was for Audi: A silver Audi rounds the drive of a gorgeous, yet not opulent home. Blankets of snow cover towering pines and shrubs. The columns of the house are wrapped with green garland and a pair of white-lit potted pines frame the front door. A handsome, white sliver-haired couple is putting finishing touches on their holiday decor and trimming their tree that's right in front of their bay window (of course). Lovely, generic Christmasy piano music accents the scene. They look out the window. A gleaming silver car with four interlocking rings on the grill, and those cool headlights that look as though they're lined with tubes of white neon parks. A man strides past the camera (all we see are legs walking and decorative bags hanging from hands, and hear feet crunching in the snow). Cut immediately to the foyer (which of course has a large, round wooden table adorned a vase of white lilies and some other random, preppy Christmastime decorations) Generically-attractive-son clomps into view while calling out, "Mom? Dad? Guys?" Handsome silver-haired couple have split (probably because they're horrified that unremarkably-handsome-son doesn't have a generically-beautiful-wife-and-2.5 children). Then an engine vrooms, (unremarkably-handsome-son is also stupid since he left the keys in the car) he looks out the window, the passenger door slams shut, and the gleaming silver car peels out. Inside the car, handsome couple smile at each other. The man says of their son, "He'll be fine." Voice-over guy proclaims: "More people are leaving BMW, Lexus and Mercedes for Audi than ever before." Ahhhh. Nothing like viewing the the perfect Christmas fantasy: run for the hills in your son's car just after he walks in with presents.

There are always a few clunkers in the cadre of Christmas commercials (like this Audi one), but for the most part advertisers have nailed down evoking the sentiment of the season in thirty seconds. One commercial I always look forward to is the Hershey bells (kisses) playing, "We Wish You a Merry Christmas".

And for print ads, the Coca-Cola Santa Claus is perfect. 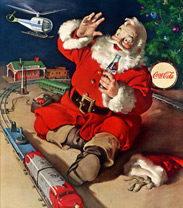 This wonderful embodiment was created by Haddon Sundblom who used the "T'was the Night Before Christmas" as his inspiration. I learned that and some other neat factoids from the link above. Given how Rockwell-esque it is I was surprised there was no mention of him as an influence on Sundblom.

Then there are the Christmas movies. There are certain movies that I'll only watch once the calendar hits December 1. Since I've relegated these movies to this time of the year only, they will be watched roughly ten times in 33 days. I bet if they didn't have the Christmas only designation I wouldn't watch them so much - funny how that works. I need to add some more to the collection, but what I have are: The Ref, The Santa Clause, Elf, A Christmas Carol (with George C. Scott) and Bad Santa. Those are relegated to the month of December. Lethal Weapon and Die Hard can be watch all year, but also carry the Christmas movie label since the time of the year in which those movies take place. A Christmas Story, It's A Wonderful Life, Miracle on 34th Street (the original) need to be acquired.

My favorite part about Christmas movies - well any movies really - are the quotes! The past few years whence I've put in the first Christmas movie of the season (always The Ref), I blurp out a random quote from the movie on my FB page. It brings a welcomed cascade of friends responding with quotes in kind. Can't wait to make my status update, "Excuse me! Excuse me! Excuse me! If you don't mind, the corpse still has the floor!"

What are your favorite commercials and movies?