A Cranberry Fall Day and the Perfect Tuna Casserole

October 08, 2012
Fall! Autumn! This season is so fabulous, it's the only one with two names! This past week was something of an Indian summer, especially Friday and Saturday. Normally I would be irritated by the warmer temps in fall, and I was. But not as much as I could have been, because after living in Tucson for the preceding three years I don't have a plethora of professional cool-weather clothes. The professional clothes hanging in my closet, which I've been clinging to for about ten years, are of the warm-weather variety. I got rid of some of my favorite cold weather items because they didn't fit well since, amazingly enough, I'm thinner now than I was then. Some of those clothes were pretty funky and cool (me to a T!) so I'm sad I don't have them to wear. Since Isaac is growing like a weed and as in desperate need of some new clothes as I am, he'll get them first.

We live in the cranberry producing capital of the world. Our house is on a street that's chock full of cranberry bogs and tis the season for harvesting! Our nice neighbor knocked on our door Sunday morning and asked Ben if he'd ever seen the harvest. No we haven't. So Ben and Isaac went down the street and watched some of the harvest. It begins by flooding the bogs with water causing a magnificent red patch to emerge in the field. I don't have a picture, but I drove past a cranberry farm on the way to work this morning and saw gigantic hoses snaking from tanker trucks into the bogs. I assumed that's how the berries were removed from their watery home.

The greatest thing happened Saturday. While procuring the grocery items specific to Market Basket, Ben grabbed the wrong tuna - it was packed in oil instead of water. I was all set to make tuna melts for dinner; as I drained the tuna, the liquid that trickled under my thumb was thicker and slicker than normal. I pulled the can in for a closer look - packed in OIL! Oily tuna for tuna melts - ewwww! But the can was open; there was no going back. What was a girl who can't improvise to do?? Queue the girl's hubby who incited the panic - "So why don't you make tuna casserole?" Laaaaaaaaaaa! Tuna casserole!!! Genius! I've been on a mission to make the most delicious tuna casserole ever and because of his "screw up", I accomplished it!

A little history about me and tuna casserole. It was one of my favorite meals growing up. I glommed down multiple bowls of copious amounts of cream-of-mushroom-soup coated egg noodles. It was my bowl full of hugs growing up. Since it was the only thing I knew how to cook when I moved in with Ben oh-so-many-moons ago, I made it at least three times a week - and he grew to detest it. I eventually stopped making it.

I've mentioned before that thinking outside the box isn't my strong suit, so I'm constantly endeavoring to make my box bigger, allowing me to make intuitive leaps. I've developed an allergy to relying on overly salted, condensed canned soups in my cooking which left me at a loss to come up with another sufficient creamy substitute. But when Ben cajoled, "Well why don't you just make tuna casserole?", my mental librarian started sifting through the card catalog of recipes I've accumulated and found the answer to my quandary. I made zucchini-rice casserole earlier this week, and within that recipe was the answer to my creamy dilemma.

While this tuna casserole is a taste-bud explosion, it could have been better. Because I didn't have any French's Onions on hand, and it was a bit late to make my own fried onion strips, I settled for sprinkling 4C Seasoned Whole Wheat bread crumbs atop it, then dolloped about two tablespoons of butter over the bread crumbs. Ben was amazed and Isaac, who looked as though he wanted to ralph when I told him tuna casserole was for dinner instead of tuna melts, speed-scarfed his serving down. I even had seconds (a fact which I was relentlessly teased about for the next twelve hours). I just love it when unexpected inspiration happens - especially amidst irritation. Kind of like my frosting concoction - but to a much lesser degree! 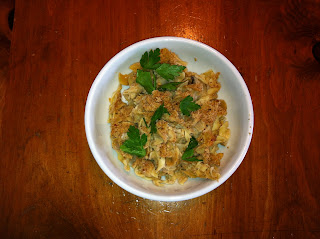 This picture is a bit misleading because it's missing the crispy golden fried onion strips. Isn't the green just the right splash of color, though? That's yours truly getting all fancy with the remains of the parsley sitting in her veggie drawer. I didn't add it to the original recipe, but as I strategically placed each leaf I said to myself, "Hmmm. Parsley. That would have been a nice kick of freshness." But then I wouldn't have had them to decorate this picture. The other element included in the recipe below, but not the first time around, is parsley.

Tsssssssssssssssssssssss.... That's you liberally spraying a fry pan with the cooking spray. (I know, I know - normally veggies are sauteed with butter or olive oil, but there is so much flavor in the this dish why bust the waistline with the extra calories?) Heat the pan over medium to medium-high heat and toss in the chopped mushrooms and onions. Season with salt and pepper. Sauté until the soft, but the mushrooms are still tender. Just under ten minutes.

While the onions and mushrooms are doing the glorious thing they do when some heat is thrown in the mix - perfume the air with a mouth-watering aroma - set a flame underneath a pot of boiling water (or light a coil if you have an electric stove). When the bubbles-are-a-roilin', dump in those egg noodles and cook as long as the package says.

In another pot combine the milk and flour and whisk, over medium heat, until smooth and thick, five minutes - give-or-take. Then add the shredded cheeses and stir until it's smooth, and when you pull up your swizzle stick, cheese trails from it to the pot in the way only melted mozzarella does. Then sprinkle in the nutmeg and stir again.

Spray a 9 x 13 baking dish with cooking spray. Combine the egg noodles, tuna, onion-mushroom mixture, and the cheesy sauce. Gently stir until all the yummy goodness is evenly distributed, then spread it into the prepared baking dish. Sprinkle the fried onions atop and bake for 25 minutes. (If you don't have fried onions, use bread crumbs then dollop a tablespoon or two of butter across the top instead). Scatter the chopped parsley over the top of the casserole after pulling it from the over, scoop steaming piles of gooey deliciousness onto plates or into bowls, season with more salt & pepper if needed and enjoy!

Not to worry, I didn't forget about my newest feature! And boy, oh boy, my Pats are looking better as the weeks pass!

Since I'm contemplating this Sunday's menu and have yet to sample it, you're going to have to wait until next week. But you'll have a taste bud tango with today's recommendations! All the recipes are Giada's - the dessert by accident. I was scouring the Internet Sunday for a particular cake and after scanning at least five options offered up by Google, it was a Giada recipe that fit all the ingredients in my cupboard as well as the the bunt pan in my miniscule collection of baking accouterment.

These meatballs are spectacular; and if you're looking for another dipping munchie, these fried raviolis are the first Giada recipe I ever made. Yum-yum! And for a little sweetness to round it all out, and celebrate the flavors of my favorite season this spiced apple walnut cake is superb! I substituted mascarpone cheese and sprinkled a bit of cinnamon into the mixture as it was mixed in the bowl. Scrum-diddly-umptious!