January 20, 2013
If I hear, "Most gun owners are responsible, upstanding citizens. They take offense at... blah BLAH BLAH!!"  - I'm going to f*ing kill myself, okay? (I'm channelling the awesome, classic, beautiful Annette Bening as Nic in The Kids are All Right when she loses it while out to dinner with another couple and the last thing she says is, "If I hear one more person say they love heirloom tomatoes, I'm going to f*ing kill myself okay?") Excellent movie, by the way. I'm going to write a review. I digress....

Yes. We know. The majority of gun owners are paragons of citizenship who have the right to shoot game, or an intruder whenever the hell they feel like it.

As a Second Amendment supporting liberal, I take offense at everyone ONLY screaming that guns aren't the problem. The fury has been percolating all week long (I've been listening to too much news this week, I think) but I've held it in check. Then, a few hours ago I saw the stupidest analogy ever appear on my FB feed: 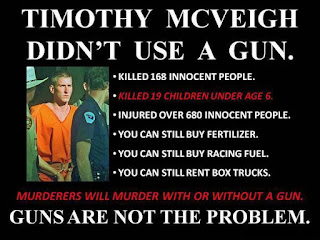 I almost responded to the poster, but I said, "Meghan. Let it go." Since this was after my afternoon workout, I put my phone down, took a shower and spent the next couple of hours doing errands, cooking dinner and cleaning. I mulled over whether or not I wanted to vent, then shrugged and thought "What the hell? That's what this is for." When I went back to find the above pic, another FB friend had posted it!!!

I'm sorry but last time I checked, each of those individual things, in and of themselves, DO NOT have the capacity to kill someone!!! One needs to have knowledge on how to combine those ingredients and morph them into vessels that dispense their insane, murderous rage!

I also take offense at the gun owners shirking their societal responsibility: Help ensure their Constitutionally protected, lethal possessions don't fall into the wrong hands. Way to superimpose your misperceived right-infringement over others' safe existence!

Yes. Psychopaths using guns (not the actual guns themselves) is but ONE of multiple problems! But ACCESS to guns is INSANELY easy (no pun intended) - and another problem! Firearms are dangerous weapons and must be tracked. And if you want to own them, you need to sign on the dotted line - like I do when I get Sudafed. I can't just go get my Sudafed from the dude with a collection of it at his house if I don't feel like signing the form at the pharmacy. To own firearms, one must have a background check, and no history of violence or mental illness! This is the world in which we live, people. You want to own dangerous weapons, you need to prove to those of us who don't own them that we're safe from you. Freedom isn't free - and this the price you have pay for being free to own guns.

Ahhhh, yes. Mental illness. The bulls-eye of everyone sharing that post. Until the horrific tragedy at Sandy Hook, Wayne LaPierre couldn't have given a flying s*t about the lack of mental health services in this country. And he still doesn't. Instead of say, proffering a collaboration with leading mental health experts in the country, then using his vast money-raising powers to raise funds that would bankroll their recommendations - or make even the slightest gesture to hide his growing nose - this problem-solving, savior of the the not-endangered amendment proclaims, "The only thing that can stop a bad guy with a gun, is a good guy with gun." What a blow-hard who doesn't give a s*t about anything other than guns.

Us gun-thieving liberals have been screaming about how grossly inadequate mental health care is for ages, yet it wasn't until a whacko invaded an elementary school, with his easily procured firearm, and slaughtered over twenty children and adults, did that jerk-off become "concerned" about the lack of mental health care. What a crock of you-know-what.

What we have on our hands are societal problems. Plural. Many things need to change if we want a healthier society and one of them is getting rid of loopholes in gun laws that allow raging psychopaths easy access TO them; ANOTHER is removing the restrictions law-enforcers wrestle with. These are not the only answers. Because they are part of the collective answer, doesn't mean the gun Gestapo is going roll into your neighborhood and strip you of your second amendment-protected possessions. There are those out there that would LOVE it if the second amendment were gutted. I know. I'm not one of them. Besides, they don't have a prayer! And they aren't in charge.

I just want the responsible, arms-bearing, paragons of citizenship to step up and pay the price for their freedom.